Today, I discovered that Update 11 was on Bullroarer. Naturally, I wanted to get the scoop on upcoming cosmetics...and to my surprise, there is quite a bit to experiment with! Leave it to me to forego actually gearing up my toons. I haven't seen everything yet, as I haven't worked on the new reputation for crafting. I'll share with everybody what I've encountered so far.

I have to say these three new sets make me feel like Forochel meets Rohan. After all, the Wildermore is mainly a snowy region! These three featured armor sets might not have their names set in stone quite yet, after all this is the first build. From top to bottom, in this section, you have the Heavy Wildermore Set, the Medium Wildermore Set, and the Light Wildermore Set. From left to right, for each respective set, is the default color scheme followed by a dyed version.

Feel free to click on each of these for a larger image! 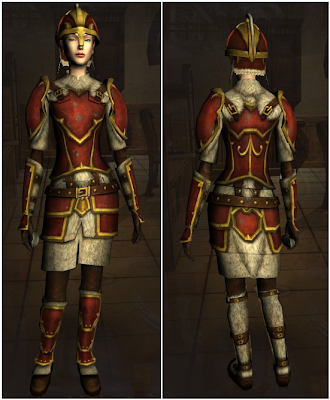 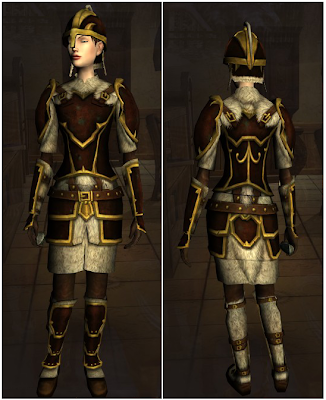 ***Public Service Announcement: In Lieu of the 3rd Shire Riddle Race on Gladden this Sunday, and their addition of a fashion show, my event has been rescheduled to the following Sunday, April 28th to avoid event conflicts!***

Finally, the Anniversary Festival has gone live! I don't have too much to report about the festival itself, since it's almost exactly the same as last year. The two differences are this--you can't use the raid exploit to farm envelopes any longer, but the envelopes have a very slim chance of containing the Reveller's Gilded War-steed cosmetics. One person on Gladden obtained them this morning and posted them on GLFF. Basically, if you've seen the Reveller's Gilded Steed, you'll have a very good idea of what the war-steed appearance will be.  For a wonderful overview of the barterable cosmetics, please check out Hymne's 5th Anniversary Cosmetics entry at Cosmetic LOTRO.

Now for the meat and potatoes of this particular post!

On Sunday, April 28, at 3 PM EST, Rangers of the West and myself will be hosting a server-wide Festival Ride and Fashion Show! This is a two part event, starting at the Methel-stage in the Shire. From there, we'll be riding in unison to the Bree-land Festival Grounds. If you do come early and attend the ride, feel free to bring fireworks, mingle with us, and celebrate! Once we reach the Festival Grounds, we'll let everyone get settled in and begin the Fashion Contest!

There are two categories, non-mounted and mounted, each of which will have prizes for 1st, 2nd, and 3rd place. All non-mounted players have to do is create and wear an outfit that best defines the spirit of the festival! Mounted players are encouraged to create an outfit that compliments their steed of choice, whether it be a war-steed, meta-steed, or another standard mount.

The prizes will be issued as follows:

**Each dye prize is a stack of 3. If you win multiple dye packages, please choose different colors...supplies are limited.**
**Prizes have also been graciously donated by Serious Business, Rangers of the West, and Turning of the Tide**

The criteria by which I will be judging is as follows:

Did you know that the 24th will be the 1 year anniversary of Material Middle-Earth? I can't believe it's already been a whole year! I remember opening this cosmetic blog with a contest for the Forgotten Darkness kinship. Who would have thought I'd be helping to host server events?

Also, Lilyrose and her kinship, Rangers of the West, are planning a series of events that take place at various locations during the festival. As of right now, we have a horse race scheduled for Saturday, April 27th at 12 PM EST that will include a course taking playersfrom the Forsaken Inn to the finish line at Weathertop. If all goes well, we're also planning a Fireworks Extravaganza for the final night of the festival!

I found this outfit sitting unpublished in my blogger archives. Originally, I had it slotted for release in January, but I had been on break by then. While I'm working on new outfits, I'll gladly post this for everybody to see! With the 6th Anniversary Festival just around the corner, running from April 16 to April 30, this outfit feels appropriate. 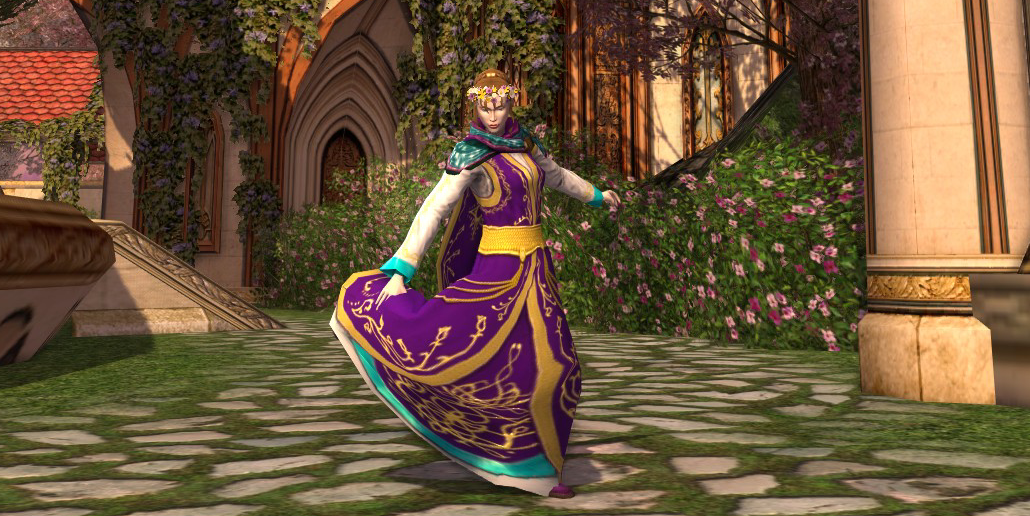 Nathellia takes pride in her ability to perform. An uplifting song, a festive dance, and a genuine smile is all she needs to bring joy to the lives around her. She throws herself fully into each note and deliberately placed step. With the festival on the way, she takes the time to practice!

A Return from a Lengthy Holiday

My, it's been a long time since I updated here. I had taken a break from LOTRO and all things LOTRO related, but I wasn't expecting it to be so long! It's been four months since my last blog post. It's been two months since I stopped playing. In a nutshell, I just got tired and aggravated with the game, not liking the direction the developers were taking this MMO. Also, with the way my non-gaming life had overwhelmed me, I had to temporarily stop the cosmetic blogging. Anyway, I'm back but not to the extent I used to be before December. Hopefully, I'll have some new outfits ready to go in the next week or two! To those of you who periodically check this blog, if there's anybody left at all (I hope!), thanks for being patient!

As an unusual bonus, here are several screenshots unused in any of my outfitting posts. Whenever I make an outfit, I take at least two dozen photos at a given time at a location...but only four of them make it to the final stages of a blog post. You might recognize some of the outfits below...but I can guarantee you that some of these haven't made it to this blog yet! Oh, the things you find archived from a different time and a different computer...