Material Middle-earth is back in business with a complete overhaul of the layout and graphics in addition to an updated contact page, tagging system, and screenshot guide. Please feel free to browse around, adjust to the new layout, and offer suggestions. 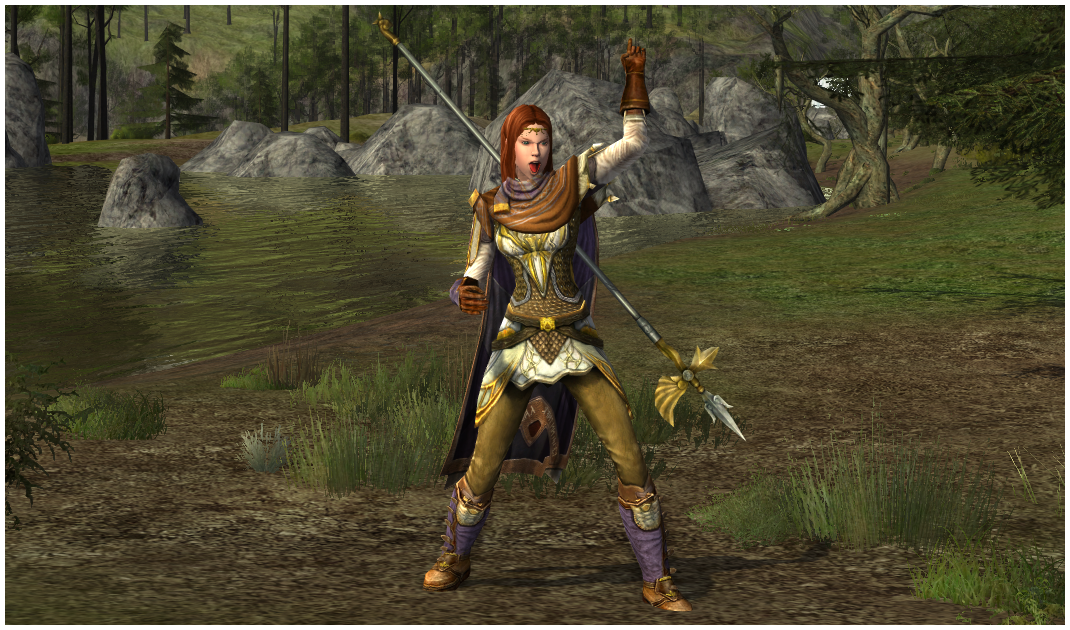 Definitely taking a walk on the wild side with this outfit, that's for sure! I try not to use more than 3 different colors in an outfit because it can be artistically disastrous. However, there are several distinct colors in this ensemble and it works wonderfully! I honestly had no concept for this outfit today. It haphazardly fell together while I was both mixing and matching between light and medium armor and assigning random colors to each piece. The T5 crafted medium chest and leggings, both from the Elven Campaigner's set, were the building blocks to this outfit. I'd have to say those two pieces are arguably the most appealing and coordinated pieces of all the crafting professions in LOTRO. Elegant designs, a pleasing mishmash of colors, and dyeable areas that don't overwhelm either piece. Safe to say, this was one of my more unique creations.

I'd like to apologize for the condition of this blog over the next several days. I'm starting to implement some of the changes I mentioned about a month ago. I'll be starting with a complete tag overhaul, which will involve modifying two years worth of outfit posts and streamlining the system I've been using. Some tags may stop working after updating enough of them. After all, in my early blogging days, tags were picked at random but weren't very consistent. Second, you may notice new pages or layout errors...I am starting to teach myself HTML because of Blogspot's limited resources. Since I don't speak any of the programming/coding languages yet, I thought this would be a good place to start. Third, I might be changing over some of the graphics found here, most likely moving towards a more Gondorian theme to match the direction that LOTRO is heading.

Thanks for your patience!

UPDATE 5/27/14 @ 6 PM EST: All tags have been reorganized and 80% of posts have been retagged. Please refer yourself to the header above to the "Finding and Outfit" page if any of the tags confuse you. I've got brief explanations beneath each category. Also, a brand new contact form has been uploaded and added to the header as well!

UPDATE 5/28/14 @ 8 PM EST: I've started playing around with template designs (manual HTML editing involved) and I may have found one that suits my needs. Changed the size of the content window to accomodate monitors 1600 pixels wide, which was an issue on the old format. Pages in the header bar below the blog logo are still a work in progress...the new template kinda messed up the text arrangement. That'll be next on my list, along with updating the "Taking a Screenshot" guide. I have also decided to use a general Middle-earth theme versus a Gondorian one. I thought it would be more prudent to have something that won't change with every expansion.

UPDATE 5/29/14 @ 5 PM EST: Added a new blog banner, as the old one was outdated and no longer matched the new layout and theme. Also, I've temporarily removed the "Taking a Screenshot" page and begun to rewrite it.

UPDATE 5/31/14 @ 1 PM EST: After four days of work, I've posted the new screenshot guide. I hope it lives up to everybody's expectations! And this should conclude the renovation of Material Middle-earth. *wipes sweat from brows* 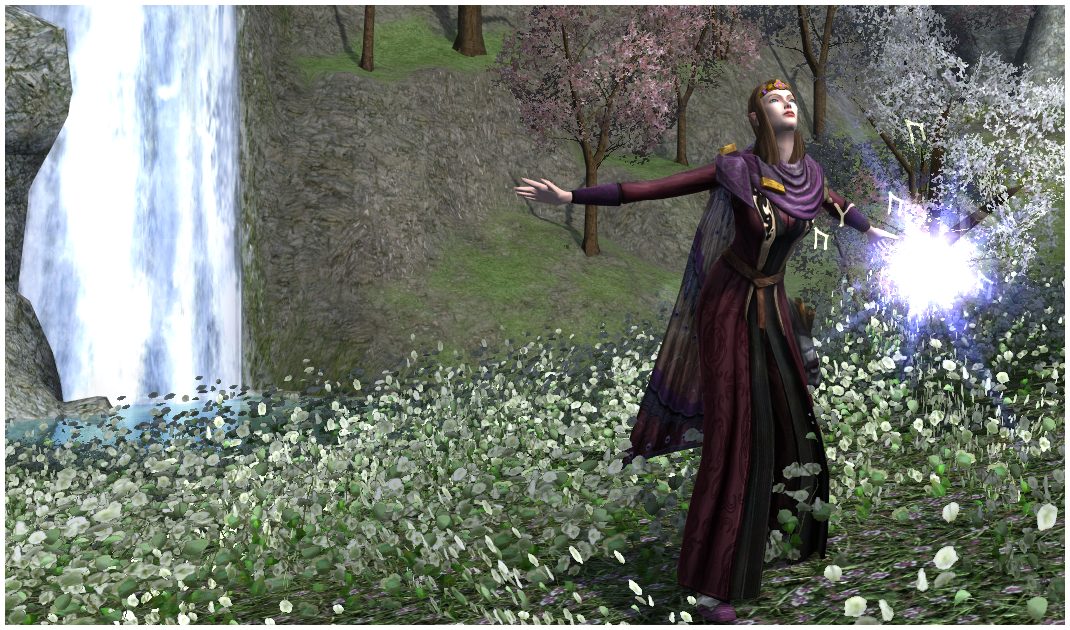 I think in this latest stretch of my cosmetic compilations, you'll be treated to some outfits I never quite felt finished until recently. I started playing LOTRO in 2010, just after it went free to play. Not quite sure what I was doing at that point of the game, I bought a couple of cosmetics from the store in addition to the Lone-lands and North Downs quest packs. I used one of those store items here, the Cloak of the Northern Lights, and this was only time it's been used in any of my outfits successfully. It still hasn't felt quite right anywhere else because of the rainbow of colors and the limited dyeability. Even so, I love to just look at it in the dressing room window!

When I sat down today, I was surprised to see this year's Spring Festival active. Unlike with Hobnanigans or the 2014 Anniversary Festival, this was simply dropped on us without hint of a date. However, if you had been watching the recent TTHTI (Take The Hobbits To Isengard) livestreams, Sapience had made a vague comment that this would arrive sometime at the end of May. Honestly, a date would have been nice to have prior to this preview of the cosmetic rewards. Oh well : )

But, while we're on the subject, the 2014 Spring Festival runs from today, May 20th, to June 3rd. I wasn't around last year for this event, so if you're interested in seeing the cosmetics from 2013 and 2012, please drop by Cosmetic LOTRO and say thank you to Hymne.

In the pictures below, you'll find I've dyed each piece red through the dressing room panel to demonstrate how they'll dye. Beneath each picture, you'll find the name and token cost for each cosmetic. Sadly, we've got another reskinned robe and "tablecloth" steed. 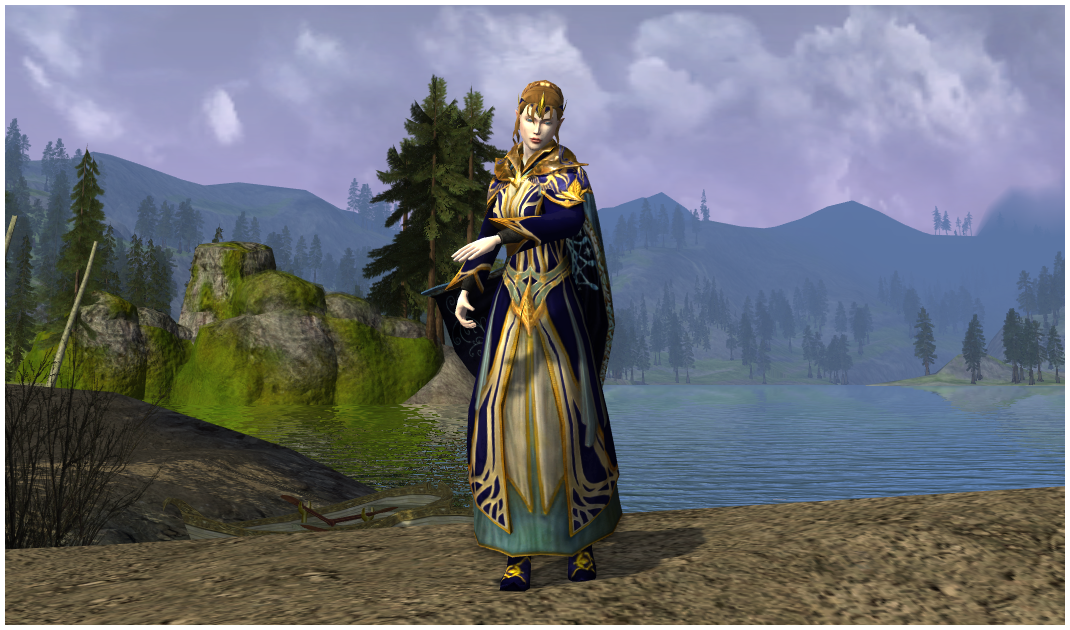 Whenever I find myself stumped cosmetically and never know what direction to take, sometimes I'll ask in kinship chat for a random piece of gear or a specific color. Believe it or not, getting a random response actually helps me focus. If it's a color, I'll hunt for pieces that dye well. If it's specific gear, I'll search for similar stylings or matching set armor. It's certainly a challenge but it's also fun to let someone else provide you with the foundation of your next creation and not deviate from it.  At a friend's request, I focused on ered luin blue.  : ) 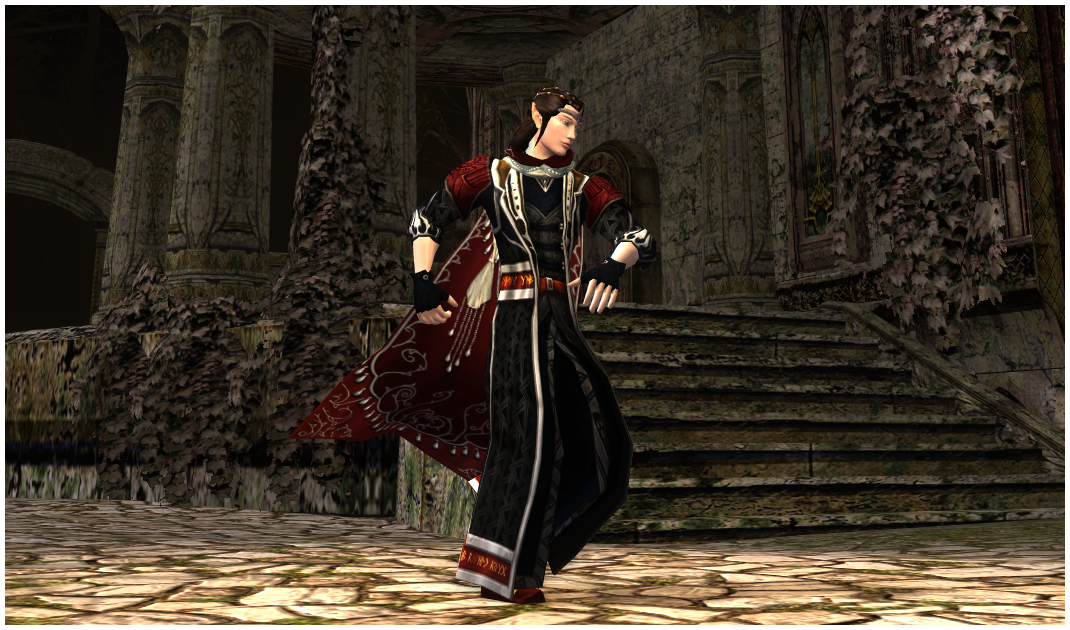 After the Elven tutorial to LOTRO, you'll find yourself standing before the gates of a razed and abandoned Edhelion. This area has seen relatively few changes over the years and is rarely visited once the main game begins. In the early days of LOTRO, you eventually revisited this refuge as you made your way to Skorgrim's Tomb, northeast of Edhelion. Update 2, I believe, changed the format of the intro and rearranged some locations. The tomb was moved, and a few NPCs were added to the town during the intro. Once the new intro was completed, there was never reason to return and this area became nothing but a distant memory...

...unless you were an avid Inn League daily completionist. : )

For the past six or so years, the community has been crying for Hobnanigans to make a return. Officially, today marks the first live re-release of the game! It will be running this week from May 9 to May 11, even though it's active at this very moment. I've been having a very enjoyable time, indulging in half a dozen games thus far. It's certainly an event nobody should miss, despite the bugs that pop up occasionally. I'm sure as time goes by, the kinks will be ironed out.

According to jwbarry, from the LOTRO Forums, "The intent is that this gets run once every month or so. Some of the prices are set to be earned in a single weekend, some are set to take a longer season to acquire." It's not the first half of that statement that worries me...it's the latter.

The barter costs are so high that it's absolutely discouraging to get anything other than recipes and single use items. Recipes and other single use items range from 10 to 25 Hobnanigans Tokens. Housing decorations range from 60 to 300 tokens. Pets cost anywhere from 150 to 1200 tokens. Cosmetic items range from 150 to 600 tokens. There is something VERY IMPORTANT to note here. Some items require special tokens, which you trade up for with your normal tokens. These special ones require anywhere from 150 to 1200 Hobnanigans Tokens each, driving prices sky high. Liking that pet with that teal name? Collect 600 tokens for it, in addition to the special token requiring another 1800 tokens. Yup...essentially 2400 tokens for a single item. But, let it be said there's a chance the winning team will get one of those special tokens. However, I haven't seen anything other than the White Chicken Token (valued at 150 Hob Tokens) drop.

The way the game works, from what I've learned, is that you'll earn tokens no matter what. Everybody gets five tokens for participating in each 10 minute match, and then additional tokens if you win. Winning a game will net you ten additional tokens. It is going to take a long time to earn the cosmetic rewards and cosmetic pets, so I'm hoping that winning will provide a generous reward.

Below are the cosmetics offered and the required currency totals. Keep in mind that not all pieces are dyeable.  However, anything that is dyeable will feature a violet version to the far right. I won't be featuring the pets here, as I only post clothing and implements. : )

Welcome to this experiment of mine, an experiment not in hues, but in tones of brown. You'll notice how I've tried to cover the entire spectrum, going from white, to cream, to brown, to umber, and finally black. I've backtracked through my blog and this would be the first time I've actually concentrated on a specific color. Making it was the easy part. Taking screenshots...that's a different story.

There's currently a visual bug or an animation glitch where your characters will not grab hold of their weapons during an out of combat skill animation. The Champion's blade wall? You swing an invisible glowing sword while your actual weapons are strapped to your character's side. The Warden's Battle Preparation skill results in your spear/javelin gambit using invisible weapons. The Lore-master's signs of power skills result in the animation pictured above. Oddly enough, these bugs don't show up while in combat. I've bugged this, but I don't expect it to be fixed anytime soon. However, it's great for getting some unique poses without a weapon obscuring your character!