Gift of Foresight - Lanael of Gladden 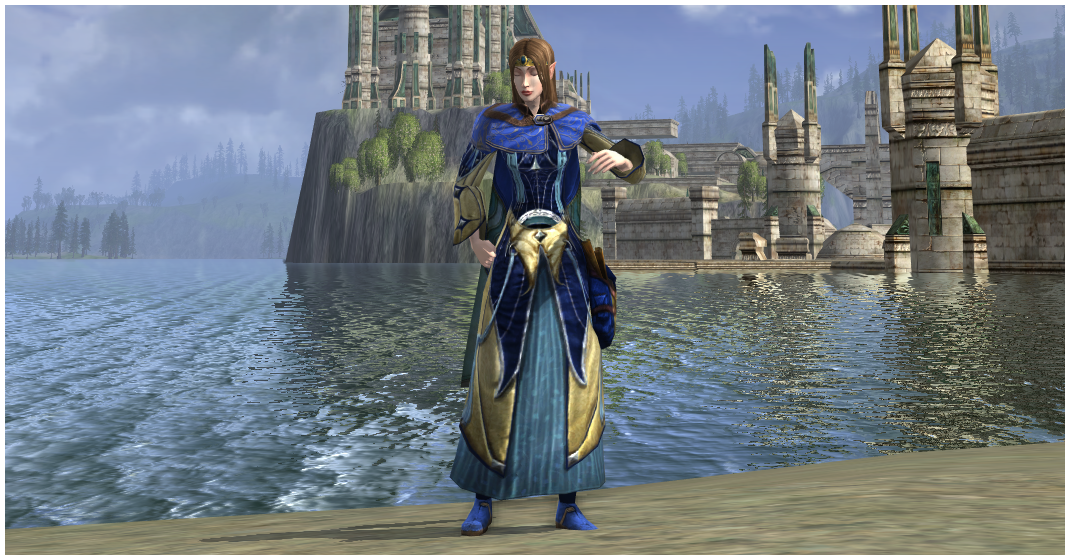 Author's Note: It's not often that I encounter someone who gets excited over a very specific cosmetic. I recently resumed using a long forgotten Twitter account, and happened to post that I snagged a particular piece of gear. It wasn't long before I received a tweet saying "For now I can only dream of getting it :D I can't wait to see your outfit :)" I was going to have this automatically published sometime in early January due to scheduling reasons, but I decided to squeeze this in early. Lorinell, this is for you!

After two arduous years of raiding and running retro content, I finally managed to get my hands on the chest piece elf-stone from the Mistress of Pestilence in Dâr Narbugud. Although the elf-stones are bound to account, this is a Rune-keeper exclusive item--the Robe of the Lady's Foresight. You'll have to drag a level 60 Rune-keeper to Caras Galadhon to barter for it. Similar to obtaining the class-specific teal armor from the Moria instance cluster, you won't be able to talk to a class vendor in the Twenty-first Hall unless you are that class. It's sad when a restriction like this exists...so many great cosmetic pieces either go unnoticed or unused. Until this year, I never had any particular use or interest in the Autumn Nights gear. No matter what I used or what I combined with anything out of the set, I simply could not get those pieces to jive. I was determined this year, and there was a single piece that made such an outfit possible--the crafted light armor Wildermore shoulders. I snagged that guild recipe recently and have been combining it with as many other cosmetics as possible! And I never realized the array of Autumn colors in the leaf pattern of the cloak until I dyed it black.


Today at 10 AM EST, the 2013 Harvestmath Festival began. It will continue to run through November 4th. I was logged into LOTRO about 10 minutes after the festival started to grab some screenshots of the new cosmetics. As much as I love the designs, we have another rehashed skin of the old robe. I'm not going to lie, I was looking to something a little more innovative this festival. Anyway, I'm working my way towards getting all of these! Below each screenshot is the name and cost of each new piece.

And for your comprehensive convenience, here's a link to the rest of the obtainable cosmetics from previous years. 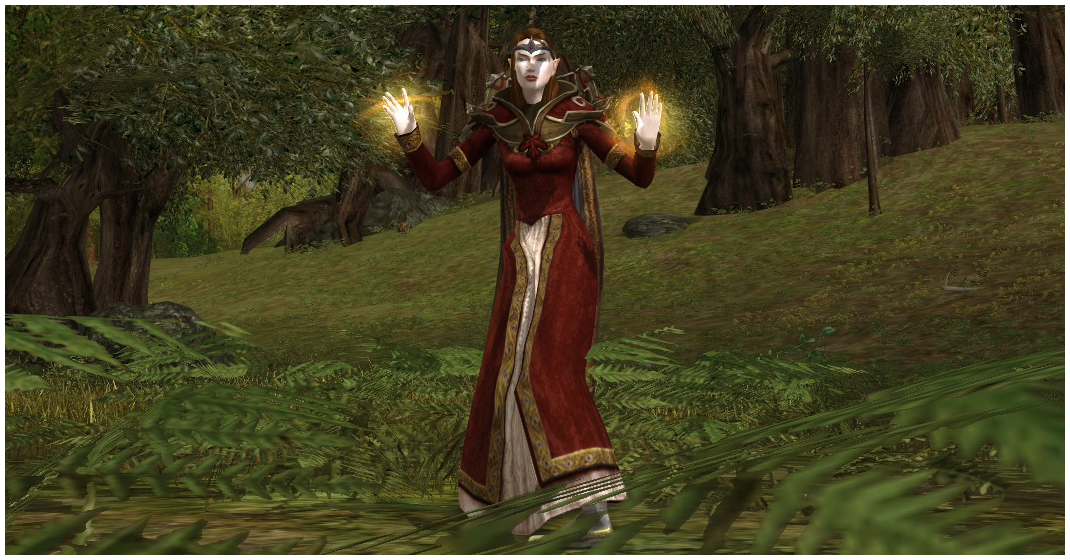 It's mid-October and Halloween (some of us refer to it as All Hallow's Eve) is fast approaching. Last year, I had a triple feature post with ideas for outfits and costumes related to the season. This year, I'm expanding the costume theme to a general Harvestmath theme, using gear and colors appropriate to the festival or the spirit of the season. I'll be occasionally posting outfits of this nature until mid-November. If I'm feeling creative, I might even attempt to reclaim some of the lesser-used Harvestmath cosmetics.

Soldier of the Mark 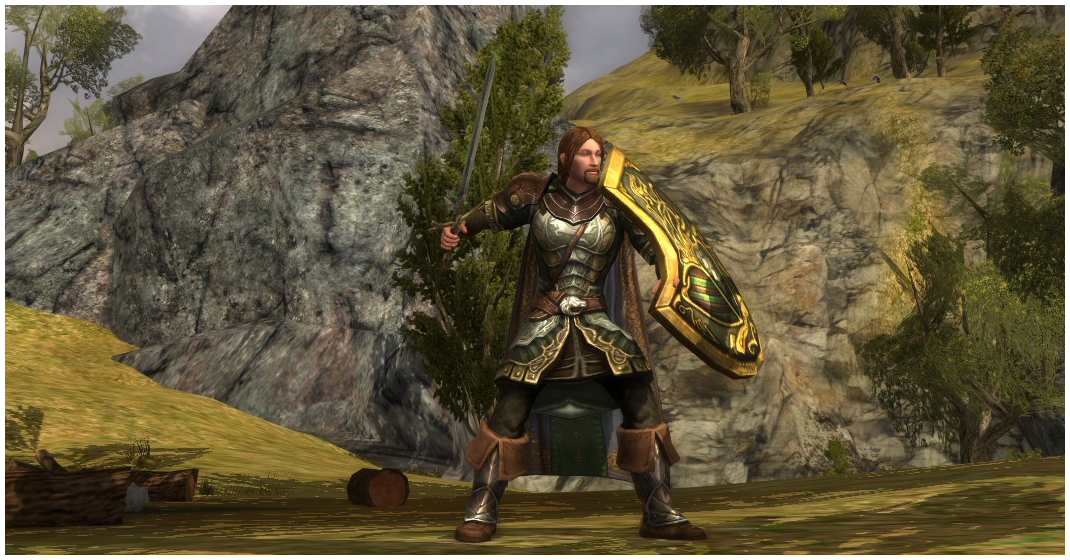 It's been rather interesting two weeks digging through my massive cosmetic vault, spread across three cosmetic mules and several level-capped characters. At last count, I made a dozen new outfits, which I will be releasing at a rate of one per week. Anyway, as I was sifting through everything, I found those undyeable pieces released with every expansion starting with Rise of Isengard. I haven't seen anybody using those on my server in the past year, so I felt it was time to start reclaiming them and integrating them into full outfits. When I pick up Helm's Deep, I'll add the new set to my repertoire. With the upcoming expansion, I've wanted to create some sort of a Westemnet-worthy outfit.

For this particular blog post, I'm focusing my energy on the Hauberk of the Eastemnet--the pre-order piece exclusive to the Riders of Rohan expansion. On top of that, it's very rare that I focus on a heavy armor appearance. 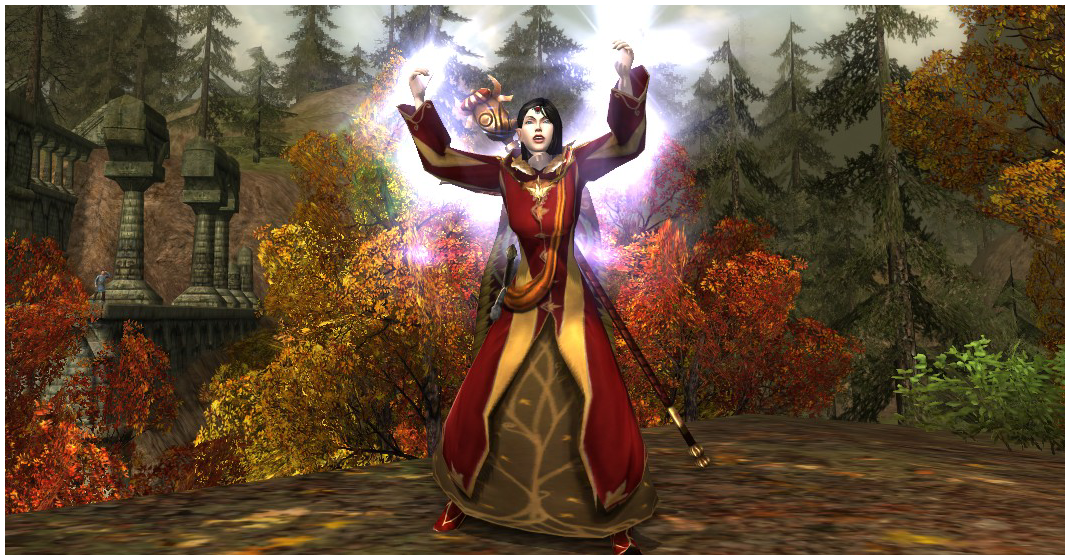 Finally, my favorite time of year has arrived. The air has a slight chill to it and the leaves are just starting to turn. I believe this is what Tolkien would have called Yávië, meaning early Autumn in Quenya. Where I live, the change in season practically occurs the same time when the leaves display their characteristic colors of red, orange, gold, yellow, and chartreuse. Because of this, I've decided to revive something from my infancy as a LOTRO player...something older than what I thought was my actual first cosmetic endeavor last year.