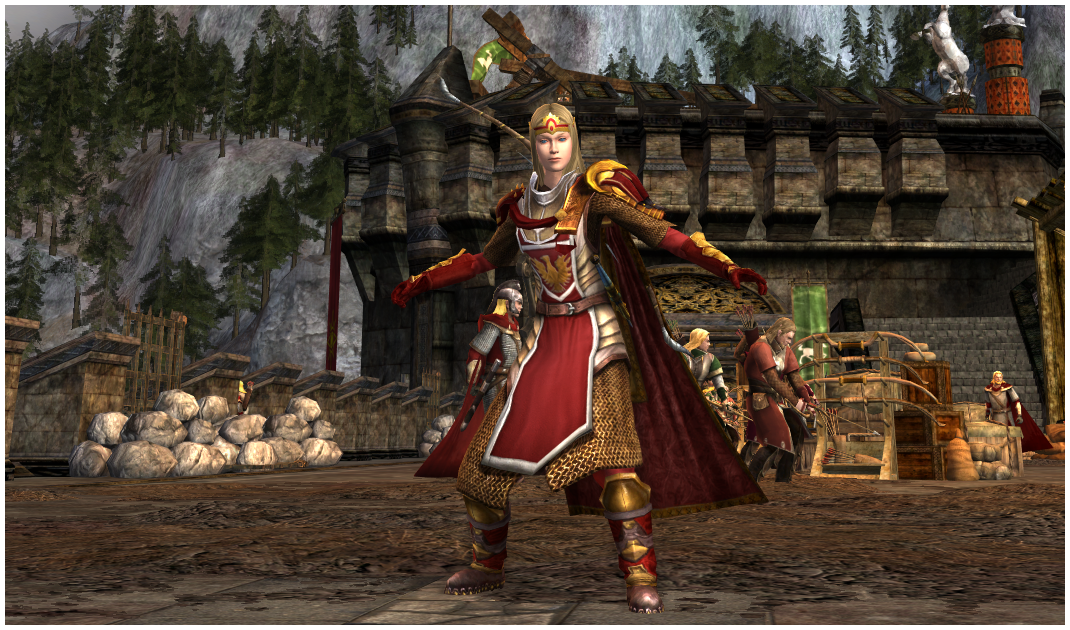 Lalia's Market has been something I've often avoided. I've never been an advocate for a cash shop that featured items that can be earned, with patience, through leveling, crafting, and accruing instance currencies. However, there have been certain pieces I have purchased because, without being a subscriber, I've never been able to access them. The ceremonial versions of the Ettenmoors gear, specifically.  Anything else, I've earned over the years with some hard work. The LOTRO Store is the other exception I make. The majority of cosmetic pieces found there are exclusive to the store. (This is this blogger's humble opinion and it not intended to insult anybody with outfits featured on the mannequins over the past year.)

Anyway, I finally decided to dip into my pool of mithril coins for this outfit. Sometime early last year, many store items were made obsolete and were converted into these coins. I had accrued so many revival tomes and tomes of dread removal from lootboxes that when the conversion happened, I found myself with a little over 300 coins.

A Change in Plans and a Compromise

At the very end of my post on March 7, 2014, I announced that I would be closing down my blog sometime in early May. There was an overwhelming and altogether unanticipated response to that very announcement. My blog's e-mail inbox began to fill. Private messages were sent via the LOTRO forums. Even my lesser used Twitter account was receiving direct messages. I've even got a few messages over Facebook. So many people asking me to continue posting here. It really was my expectation to showcase my final outfit in May...but I find myself reconsidering that decision after seeing the support Material Middle-earth has earned the past few weeks.

I don't have to remind anybody, at least that's how I feel, that everything eventually comes to an end. My kinship has basically quit the game. All the friends that I began playing LOTRO with have all gone. Helm's Deep and the associated changes were unprecedented disappointments. Since January, all I've done is log into LOTRO to make outfits. Lately, it hasn't been enough to capture my full attention and the will to play diminishes each passing day. The time will come when I leave LOTRO permanently, of that I am certain.

I still plan on retiring from my blogging, but I'll make a compromise for the community and my followers. I will continue to create outfits until my supplies are completely extinguished. That means dyes, marks, medallions, various landscape barter tokens, mithril coins, and my crafting materials. I have no intention to replenish those supplies either...and there's not much left of them. When the time comes, I will make the announcement about two weeks in advance.

Thank you for your support! 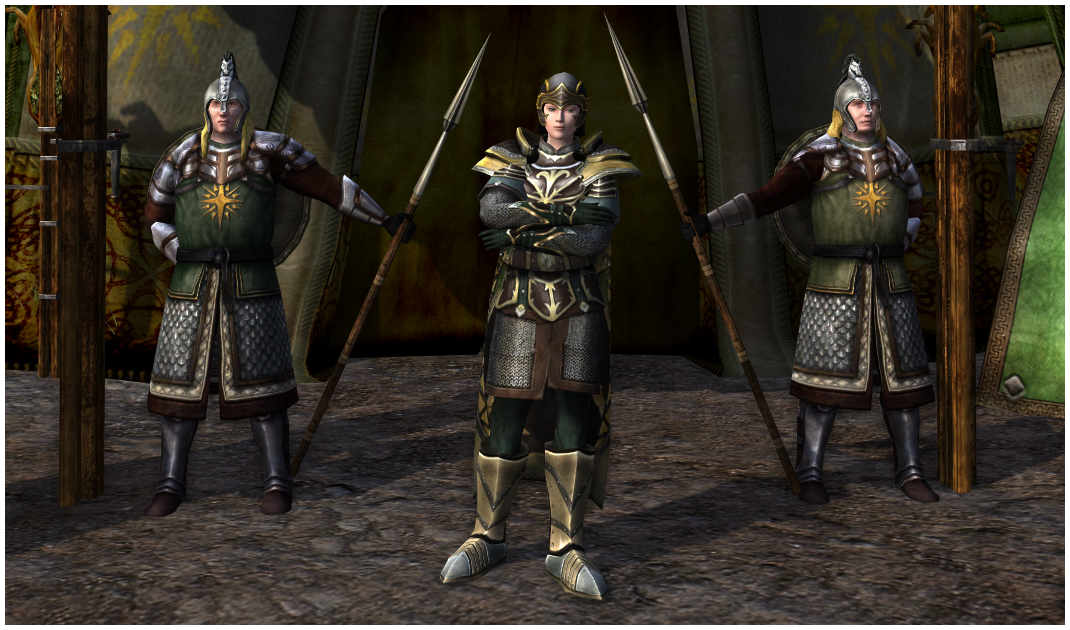 I wish it hadn't taken so long to use the walnut brown dye for the first time. Helm's Deep has been out for five months at this point, and it was the first new dye since the "In Their Absence" instances were released, I believe. I'd have to say that I've fallen in love with it. If you haven't had the chance to use it, I'd describe it as a color falling between umber and black on LOTRO's scale, making it a wonderfully deep and dark brown. Often times I've found sienna to be too warm and umber not dark enough for my purposes. Due to that, black became a common fallback color, especially for boots. Now I have the perfect intermediary color!


Whenever there's new content for LOTRO, I like to take some time and test it on Bullroarer. As U13 has public patch notes on the forums, I can share some pictures and information. There is one thing I'm notorious for when it comes to testing--I usually get bored after a while and start making outfits with an inexhaustible supply of marks, medallions, seals, and mithril coins. I was starting to do just that when I saw in the dressing room...

This dye is called steel blue. I've decided to take some pictures for the community, illustrating our new color. Don't mind these outfits and if they look kinda funky...I just took clothing already in my mini's outfit slots and dyed them. You've got a variety of pieces here to capture the range of tones. Some with pure white bases, other with muted bases, and then one that reveals the gradation of the new color. More often than not, you'll be seeing more steel than you will blue. Just wanted to warn you! : )

The photos on the left are dyed grey, the photos in the center are dyed steel blue, and the photos on the right are dyed navy. This is done in order to help everybody distinguish between these similar colors. I've chosen not to include black for comparison because all the gear featured below dyes a true black. Beta details for the recipe itself are at the bottom of the post. 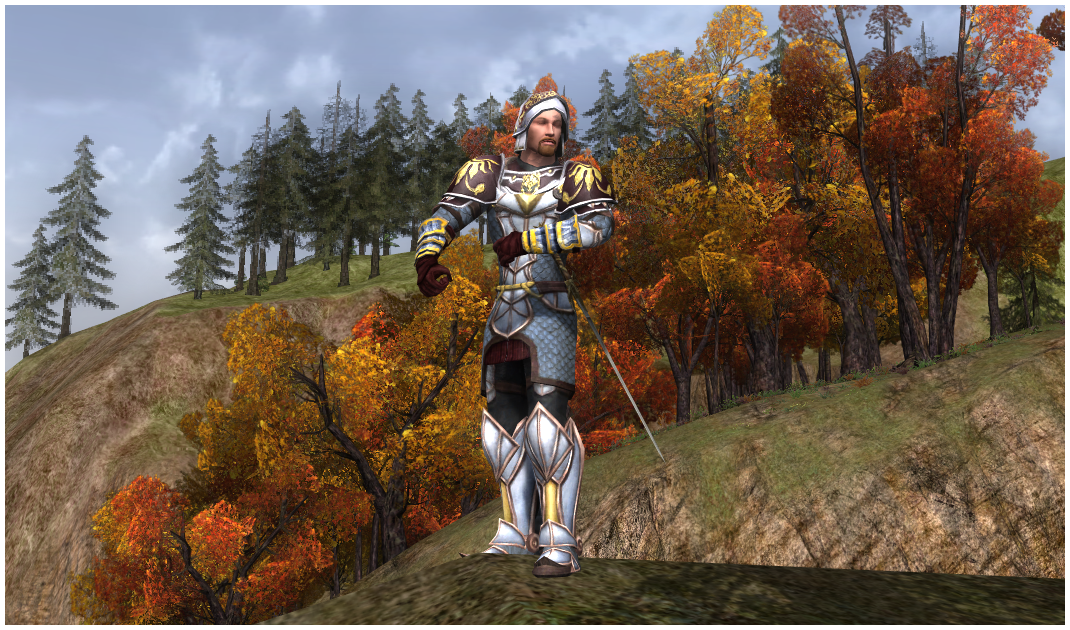 Until last week, I had no idea I'd been running the standard resolution client for LOTRO the past three years. If a couple of files hadn't been damaged (I have no idea how that happened), I wouldn't have had to reinstall the game. As with any game I play, I went into the custom download options and selected the high res client. To say my jaw dropped to the floor would be a vast understatement. When I finally got back into the game, I saw textures I've never seen on the character selection screen and the blurred/pixelated gear some of my characters had been wearing were crystal clear. And all this time I was under the assumption I already used the high res client and that my computer was just not able to handle the top-notch graphics. Guess I was wrong!

So now I can bring better screenshots to this blog and not have to sacrifice outfit clarity and quality to both larger pictures and closeups. You've no idea how excited this makes me! This might have rekindled the cosmetic fires that once burned so brightly! We'll see how it goes. If I am to stay and continue outfitting past May, it will take a genuine miracle. 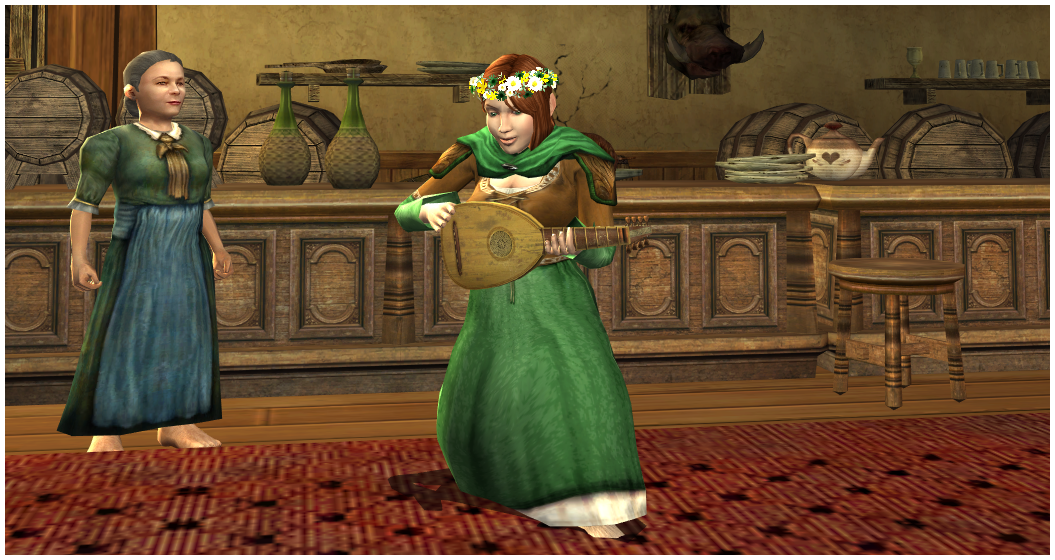 If all goes well, the Spring Festival should be coming up soon...by that I mean sometime in late April or early May. Anyway, I've been thinking about the Feast of the Greenfields, which was added literally as a tribute to St. Patrick's Day back in 2009. The handheld Bullroarer's Tankard, the Greenfields Clover Hat, and clover patch are all that comes to mind. St. Patty's Day is on the 17th, and in lieu of the festival that gets pushed back later each year, this outfit is a tribute to the "Eat, drink, and be merry!" March holiday. Except that this tribute is being done Hobbit style! On the 17th, log into the game with a few friends and kinnies, take the group down to the Shire and celebrate with a pint!

Regalia of the Seven Stars - Andalost of Gladden 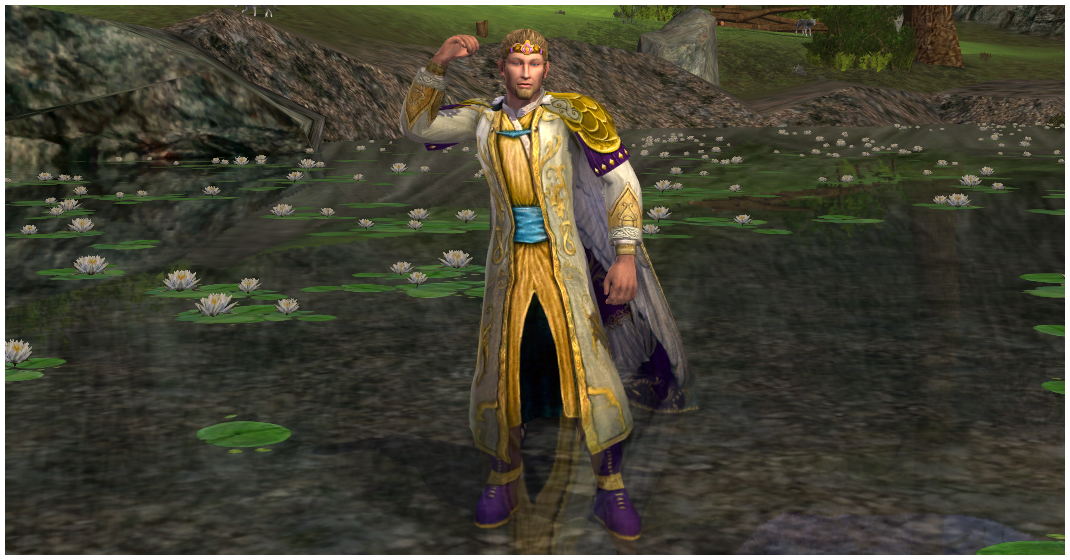 Unlike last week's post, I've returned to something bright and cheerful for the blog. For today, I want to return to one of the oldest robe skins in LOTRO and combine it with some lesser used and undyeable pieces from Annúminas. Sadly, using the original teal versions of the Annúminas gear in any outfit will automatically limit your color choices. You'll be bombarded with vibrant and quite regal strokes of purple, white, and gold. If you ever do use those pieces, try to stick to that color scheme.