Force of Nature - Faewynn of Gladden 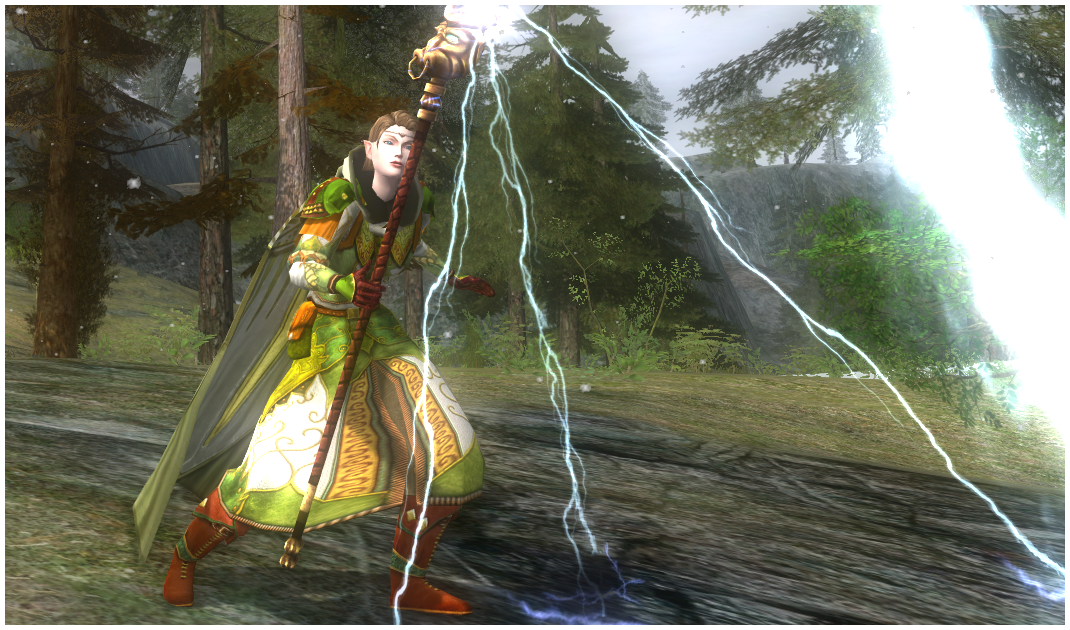 When it comes to the elements, only one class in LOTRO comes to mind--the Lore-master. There is no better class when it comes to controlling the raw power of nature. They have an unrivaled command over fire, water, earth, air...and I was hoping to create an outfit representing that. It might not be the most original compilation, as the Ceremonial Robe of the Seven Stars is often dyed white, but it's one of the few appealing colors. That insanely saturated electric green isn't easy to color coordinate, as it often drowns out everything else. The trick is to use earthen tones, turquoise, or match it with equally saturated pieces.

Although it somewhat removes the creative aspects of outfitting, you can find various pieces featuring the same green across the other ceremonial Annuminas and Helegrod sets. Sometimes when you dye gear from Ost Dunhoth yellow, you'll create a similar color. Thought I'd offer a few alternatives if you're brave enough to use this robe!

Good morning everybody! I haven't been to bed yet, but I wanted to get some screenshots of the upcoming level 100 gear from Dol Amroth on the blog for you. Keep in mind that this is only Beta Build 2 for Update 14. As it stands, there several few things you'll need to know about the sets I'm posting:

I do not know if we'll be getting new skins for the class specific gear, but they're currently using the same undyeable skins as the Erebor armor sets. I suspect that this will not change. However, enjoy the screenshots! 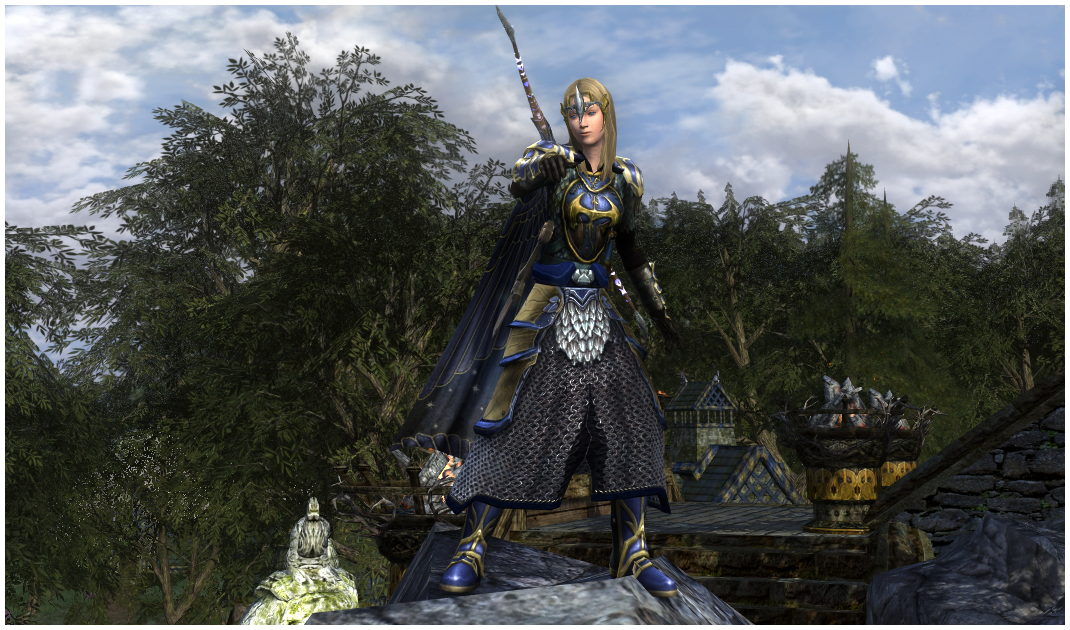 This is a bittersweet post for me. My champion, the only character that had some semblance of a background story, has returned to her home of Aldburg. If you had asked me almost four years ago if I expected to see this historic town in LOTRO, I would have said never. Not once was it mentioned in the LOTR Trilogy, and even then, only briefly in the legendarium's Appendices. As I write this, I recall memories of my character's adventures across Middle-earth--Moria, the Golden Wood, Dunland--along with each and every outfit she wore. I'd have to say, of all of my toons, this one's story has progressed the most. A shield-maiden, barely known, that ventured from Aldburg some years ago into the heart of Eriador returns a seasoned soldier, clad in the garb of the races she encountered. 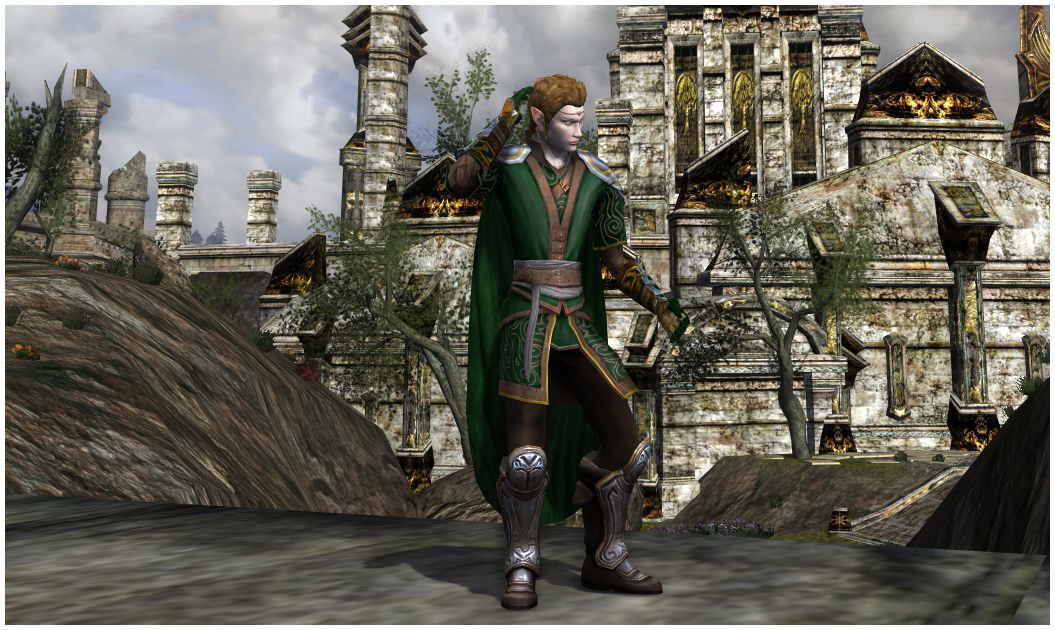 At the drafting of this outfit, I had blown the remainder of my mithril coins on cosmetics from Lalia's Market. It was either use 'em or lose 'em. They've been sitting there unused for well over a year, about the time many of the obsolete items were converted into tokens. Mainly, I went after some hard to get cosmetics, such as various ceremonial pieces from the Ettenmoors, the Lancer's Hauberk (once exclusive to the original Codemaster's servers), gear from classes I've never leveled past 65, and a few odds and ends. I felt it necessary to go all out and make the best, if not interesting, ensembles I possibly could.

As I promised in April, I'm kicking off my "Simple Fashion" series by displaying three outfits revolving around a certain type of gear. This installment will be focusing on tunics. There isn't anything long and complicated about these, nor do I have any tips or stories to tell. Besides, tunics are too often brushed aside after their respective seasons and collect dust for the remainder of the year. This post is about simple ideas attempting to revitalize overlooked cosmetic gear, using a minimal number of pieces. By no means are these finalized...they're just building blocks I'd like to share.

If this type of post seems well-received, I will have a similarly styled post for dresses and/or robes in the future! 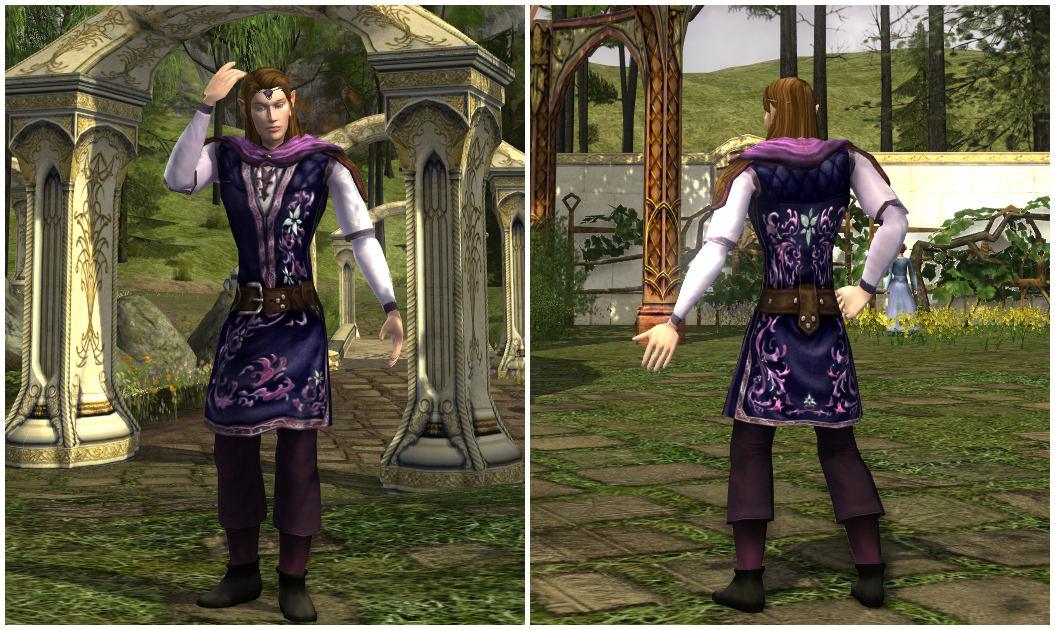