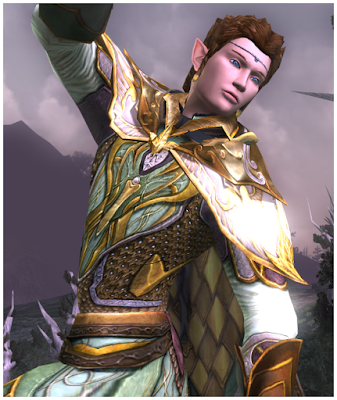 Hi everybody! Please, call me Nath. For the longest time, I've had a passion for LOTRO's cosmetics. Although this blog was founded in April of 2012, I've been experimenting with the various forms of clothing and the multitude of colors since 2010. Often, I've found myself enjoying this aspect of the game more than actually playing it! I can spend, easily, hours or days perfecting an outfit, to be honest.

Originally, I thought that I should submit my outfits to other blogs out there, namely LOTRO Fashion, and hoped to get something published there. That wasn't the case. As I explored the many cosmetic blogs back then and saw the incredible creativity and variety of player-created outfits, I decided to start my own. I posted what I felt were my best character appearances. Eventually, I posted anything and everything, turning Material Middle-earth into a resource for outfit ides to be taken and molded by the community. If it weren't for the hard work of LOTRO Fashion, The LOTRO Stylist, The Starry Mantle, and Cosmetic LOTRO, this blog wouldn't have existed.

In addition to clothing, this blog once supported player housing...for a time. As the system fell further and further into disarray, with no hope of a major revamp by the end of 2014, I stopped displaying furnished homes. Despite that, I the passion for decorating homes remained. If you look carefully through the early years of Material Middle-earth, you might find a couple houses. I've actually moved most of my house pictures to Twitter under the #LOTROHousing tag! I've also encouraged other LOTRO players to upload theirs as well.

If you need to use images from this blog on your site, please give credit and link back to the original image or post. Even though the images are from a Turbine Inc./Standing Stones Games game, and properly credited here, please be courteous. Any reposted/repurposed image that I take from another site is paired with a proper link.

If you simply need to get in touch, use the form provided in the header, which is called "Contact MME." Or you can mail/message me in game on the Gladden server on any of the following character: