To Match a Steed...Three Times!

As most of you know, the car I like to call "Inspiration" has been running on fumes for several weeks. It has been a struggle just to make an outfit, let alone log into LOTRO. I wasn't sure if I'd be able to fill in the final Saturday of January with an original outfit. At the beginning of the month, I casually mentioned on Twitter that I had been running out of ideas. One follower, @AraeElimraen, wondered if I'd take a request. I love taking suggestions for concepts as well as a specific piece or two. It gives me a chance to see old skins in from a different perspective or forces me to find new or unusual combinations. Here's what had been proposed:


The first two ideas ended up going nowhere. Whatever I did create felt, at best, rushed and lacking completion. However, the idea to match this steed intrigued me...especially since I don't own it. It was removed from the Spring Festival token vendors before I started playing LOTRO and I refused to drop 70 mithril coins for one this year when it returned. I had to search for an image, several in fact, that way I knew what I was working with. For those of you who haven't seen it, here's a picture:

It's a dangerous assortment of colors--smokey grey, black, a silvery white, and a dark teal--and they would definitely present a challenge. I wasn't sure of what characters my Twitter follower had either, as this post is mostly for her. It took some time, but I came up with three ideas to suit different styles of clothing, race, gender, and character class while trying to match the steed itself, the caparison, or both. 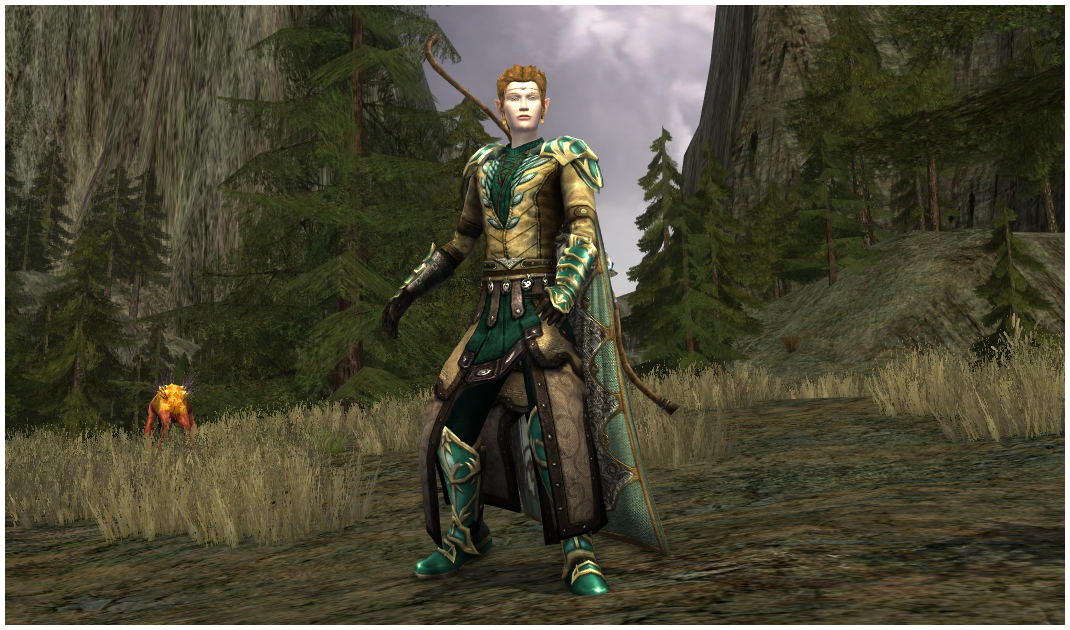 For nearly three years, I've been staring at the same old pieces in the wardrobe. I've also been relying on the same gear combinations, altering colors here and there or adding different pieces to distinguish any given outfit. What I've been trying to do in recent weeks is break that habit. Instead, I look at the skins available to me and force myself to use one piece that I've NEVER used. As ugly as I thought the robe and cloak from the 2014 Spring Festival were, I decided to give them a shot. Quickly, I found the robe to be a dead end. The cloak, however, was not. It became the focal piece of this ensemble.

Into the Blue - Andalost of Gladden 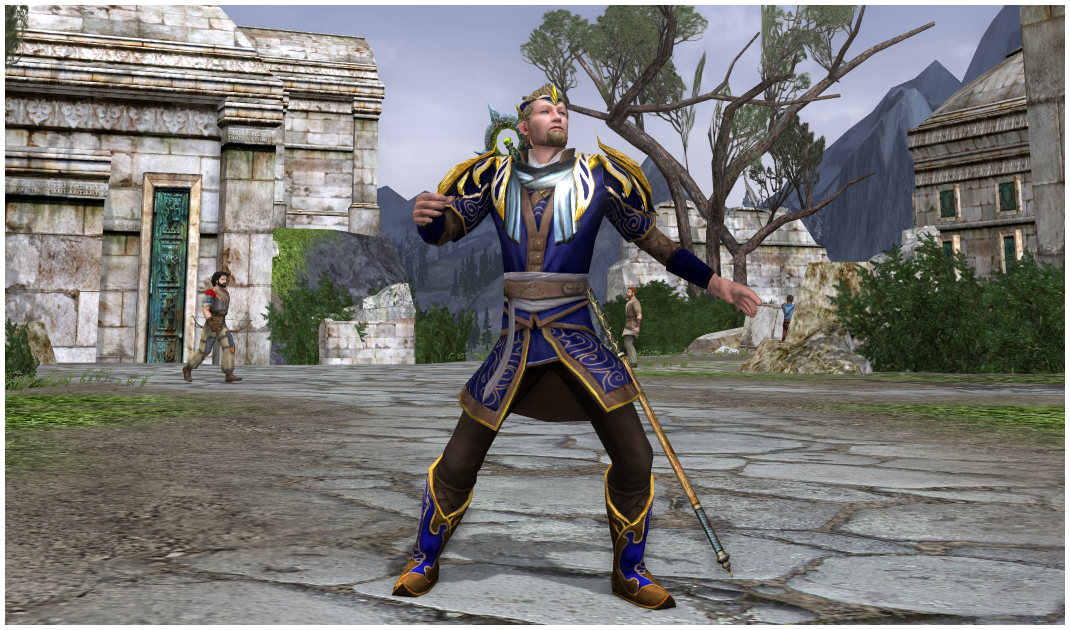 This is the second week in a row that I've encountered a lack of inspiration while browsing the vast catalog of cosmetics filling my wardrobe and the vaults of multiple characters. There was no particular idea behind this outfit. It was a random convergence of gold-trimmed and light armored pieces that unexpectedly matched. I didn't bother to check how it appears on other races, as I think most of us LOTRO fashionistas know how notorious shoulders are regarding shape, size, clipping, and placement between the races. I'd imagine this works well for elves and men, as well as the Minstrel, Lore-master, and the Rune-keeper classes. It has almost a mystical element to it.

Perhaps I should have renamed this outfit "Out of the Blue"... 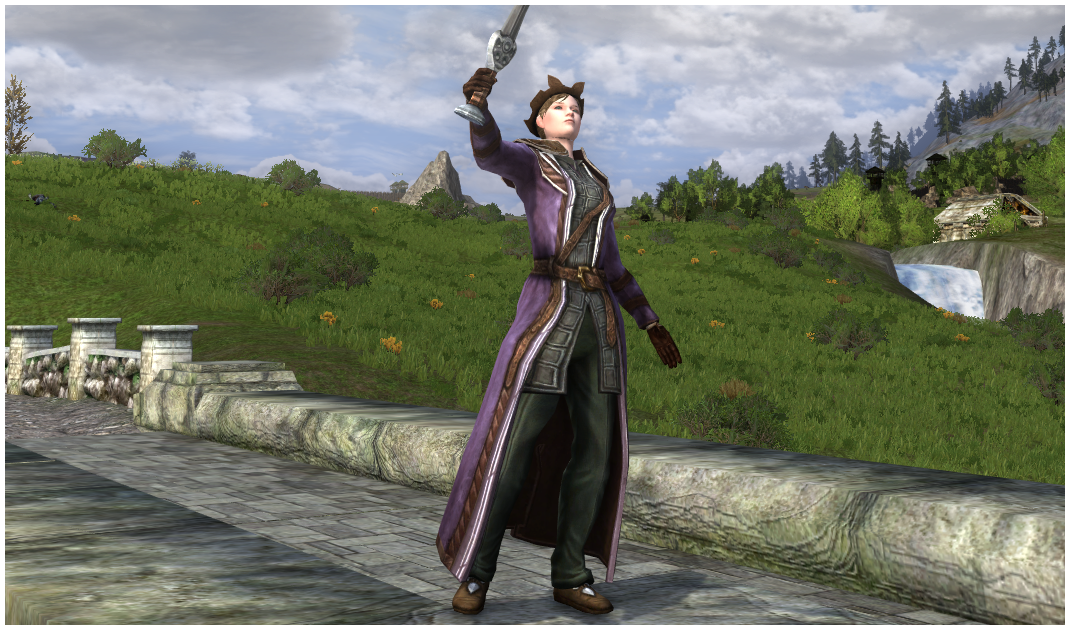 I can safely say that I'm finally hitting the bottom of the proverbial bucket. Trying to stay original with my outfits, I've decided to give the crafted light armor robe, the Supple Wildermore Robe of Insight, a try. I've been reluctant to use it for well over a year because it isn't very form-fitting and it clips with a multitude of skins in the forearm, foot, and shoulder regions regardless of race and gender. If this robe must be used cosmetically, I'd recommend using either very short/thin or bulky gear as accompanying pieces. Gloves that stop at wrist and shoes work best. As far as I know, only Hymne has been successful in using it. Check out her post from September of 2013! 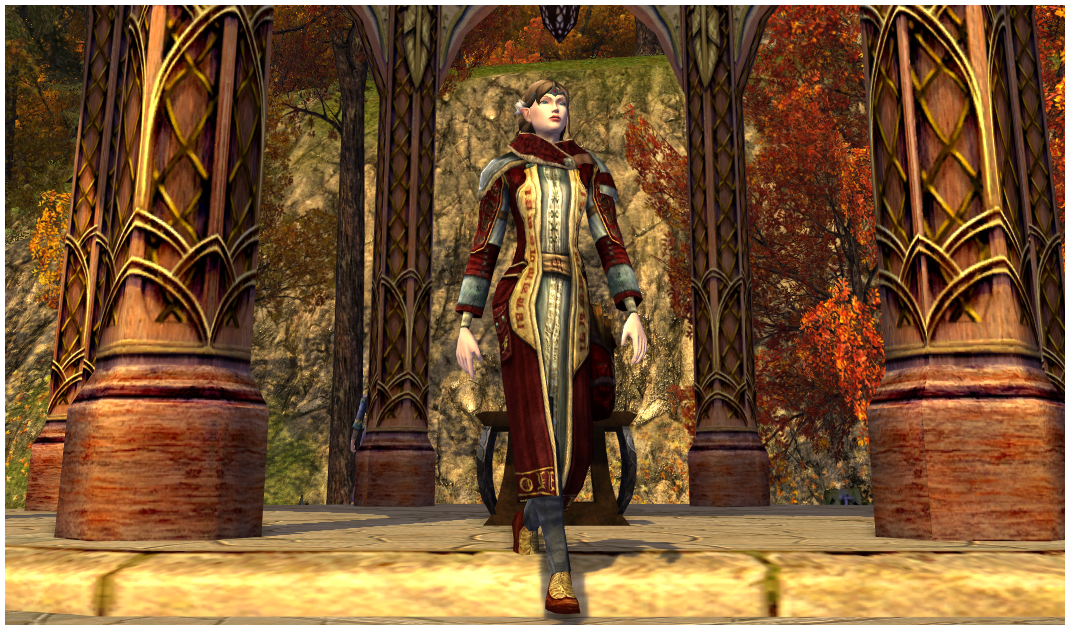 From time to time, I like to set some guidelines for a particular outfit--something completely elvish, perhaps dwarven, or even make something entirely in leather. This time, I decided to ignore all new skins released between Rise of Isengard and the current expansion, Helm's Deep. I hadn't started posting my outfits until June 2012, about seven months after RoI had been released. Even though it had taken me a while make it to level 75, I hadn't anticipated cosmetic blogging would be in my future and I sold or discarded most of my gear. I thought it'd be fun to play the "what if?" game, wind the clock back to when Helegrod and Dol Guldur were the end-game content, and see what I could create.