Good grief. When I made my way to bows, I hadn't realized how extensive my collection actually was. However, considering I have four character that use bows (my Hunter, Champ, Beorning, and Guardian), it makes sense. Still, I nearly had more bow skins than I had sword skins! It was then I realized this particular weapon class was going to need two entries.

As with the Javelins post, because of how the bows were displayed in the dressing room panel, I'll be showing the bows in groups of three. Under each image will be a description of each bow skin and how to obtain it. Please don't mind some of the images. A handful of the bows required rotating the model to take clearer pictures. 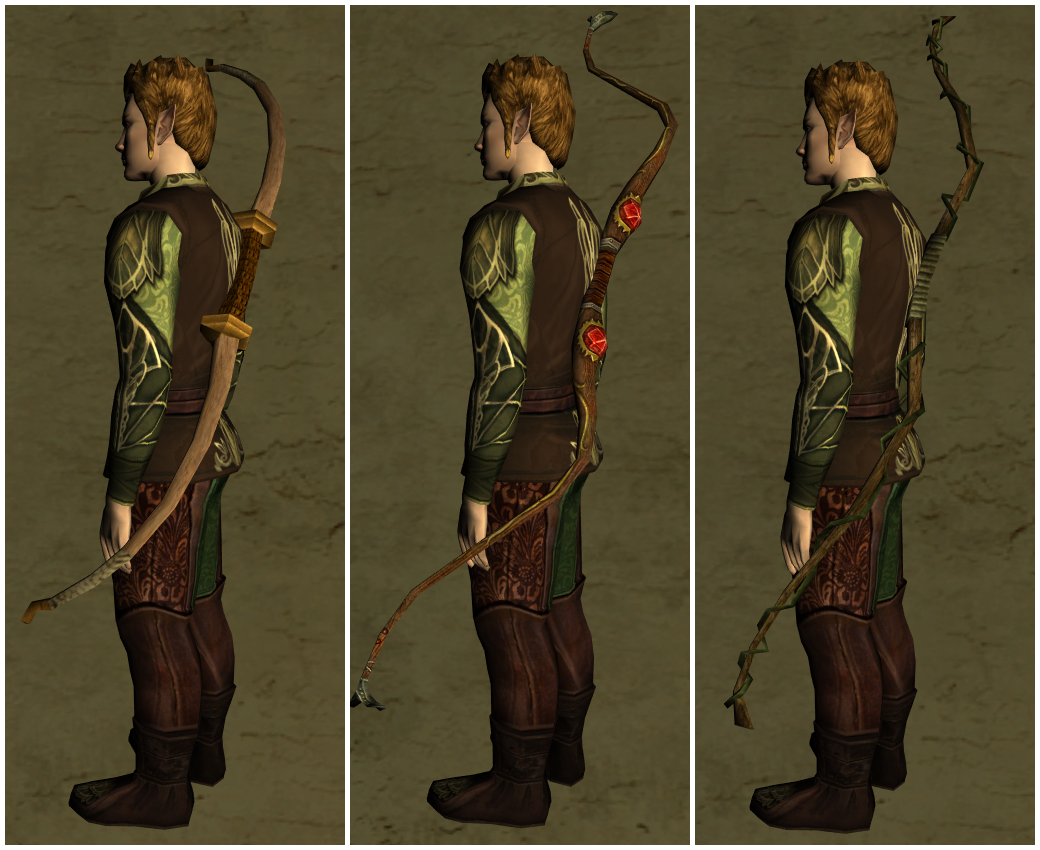 Ah, greatswords. Perhaps the most commonly used two-handed weapon in LOTRO. Many of the these skins share similar appearances with one-handed swords commonly dropped by creatures in pre-Moria zones and instances. I've never been an avid collector of this weapon type, but I do occasionally go out of my way to collect specially named ones, like Hill-defender and Warrior's Pride, both of which are listed here. The best thing about greatswords? Most of the landscape drops share crafted skins. As a result, I'll share only the crafted recipes to prevent (hopefully) hours of grinding.

Like previous collection entries, this isn't the full set of greatsword appearances. Only what I've collected over the years and where I've found them. There about thirty of them featured here. I didn't have enough to start a second entry--as I list twenty per--so they'll all be found here.

(Minor update here -- I've actually found a few more since I wrote this post. Now there are thirty six listed here, enough for two entries. However, I don't have the time to rearrange my posting schedule again. This will be image heavy!)

And just in case someone notices this, some of these are called "great swords" as opposed to "greatswords." Somewhere over the years, the crafting/item developers shifted from two words to one, but never changed the old item names to reflect the change. Make sure you use the appropriate spelling when hunting down the correct skin for your own collections.

The most interesting fact about javelins is that they are exclusive to Wardens. The next most interesting thing about them is that they share the same skins as spears do and are equipped to your ranged slot instead of a melee one. If you've seen the spear skin collection post from a couple of weeks ago, you might recognize most of these skins. In comparison to all other weapons, javelins take up the smallest part of weapon database, with almost all of the skins being craftable and requiring very little creature farming.

This collection presentation will be handled differently, due to how javelins are previewed. Unlike the weapons held in a hand, ranged weapons are viewed vertically and not horizontally. To save space and prevent a very lengthy post, I've compiled these into sets of four. Below each set will be a description of each javelin from left to right.

As usual, if you know of another weapon shares the same skin and isn't listed below, let me know! 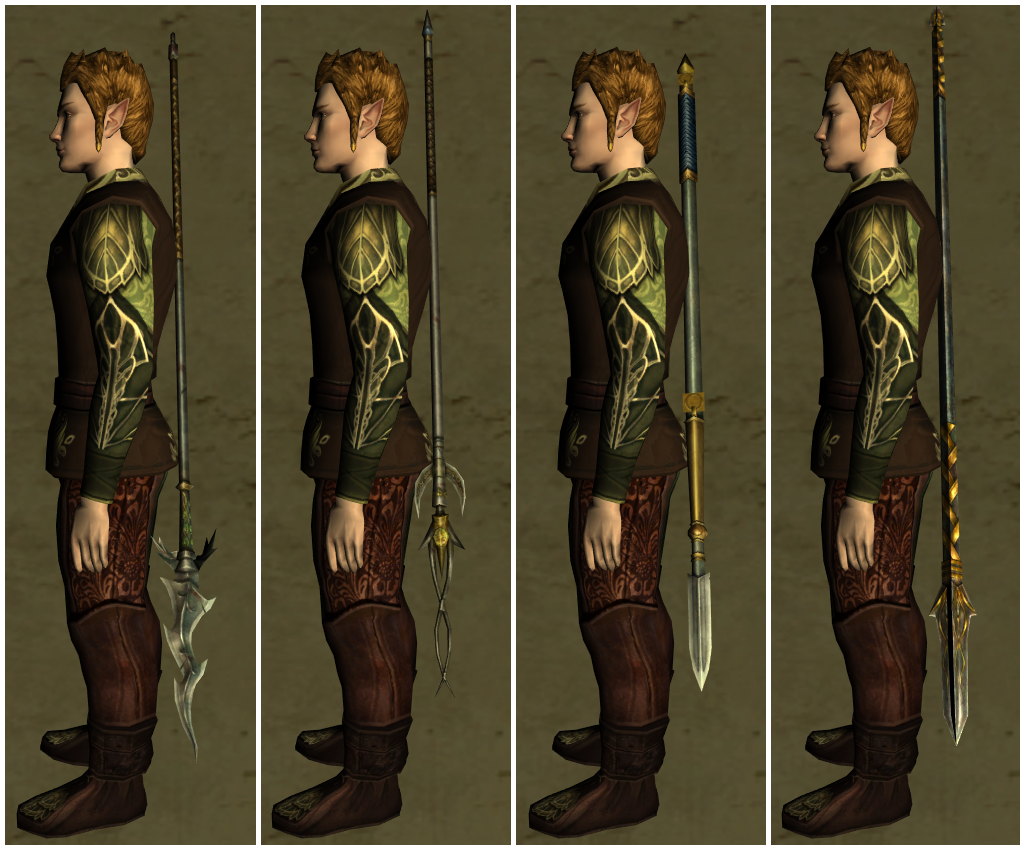 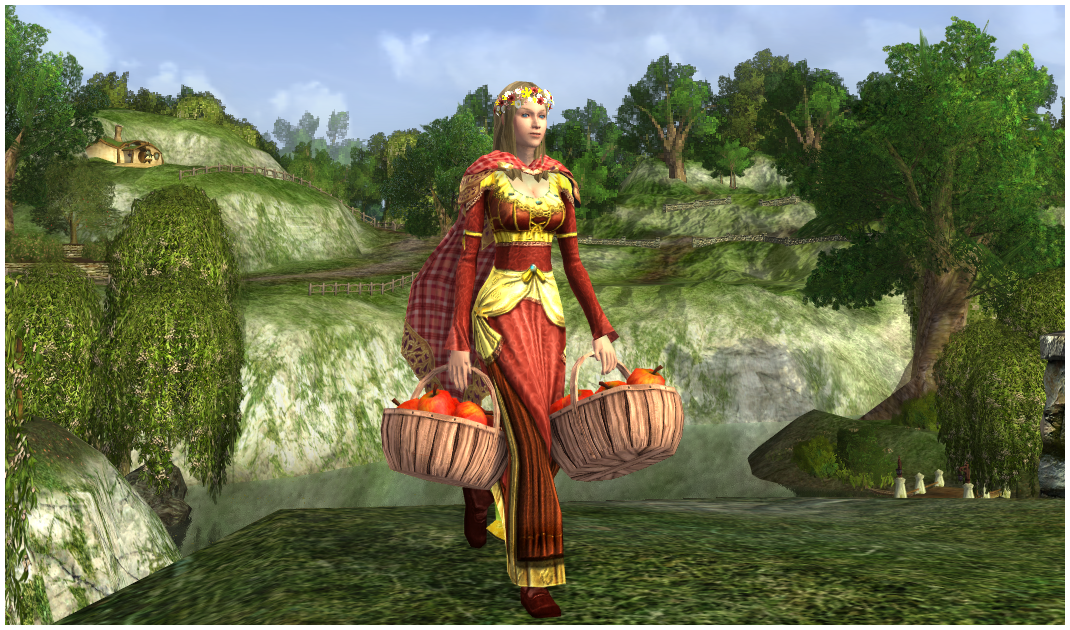 There's a bit of a story behind this outfit. My kinship, Rangers of the West, hosts what we call Open Group twice a week--once on Friday evenings and once on Sunday afternoons (server time, at least from my perspective) when we are the most active. Basically, this is when we encourage players of all classes and levels to speak up if they need certain content run. Sometimes we have several groups running at once and we try to keep them all within a certain level range to avoid facerolling the content.

One week in October of 2017, we decided to shake up Open Group a bit. You see, our lower level players had felt a tad neglected. Lots of high level dungeons were being run. What we decided was to make this a sort of free for all event that would preserve the challenge/fun for our low level kinnies. Everyone was told to bring starter weapons with them that way DPS and healing would be level across the board. I chose to add some humor to our special event. A 115 champion dual wielding Butter Knives from the Mathom-house overlayed with Baskets of Apples from the Fall Festival. I didn't stop there. I made an outfit specifically to go with those apples! (By the way, those apples never seem to fall from the basket, no matter how wildy they're swung!)

Even though spears can be used by six of the ten classes, they're one of the weapons that I see the least. My Warden has always used them. In fact, spears were designed specifically for that class. Once upon a time, Wardens got a +15% passive damage bonus from wielding them versus the +10% from other expert training passives. Then came the weapon nerf, bringing all of the expert weapons passives down to +2%. Other weapons were soon favored for wardens, based on their roles and passive bonuses. However, if you're still a spear-wielding Captain, Hunter, Warden, Champion, Guardian, or Beorning, this cosmetic category will definitely be of interest!

This may not be a complete collection, but here are the skins that I have stashed away! And as usual, if you know of another weapon shares the same skin and isn't listed below, let me know!

UPDATE: From this point forward, this Cosmetic Weapons Project of mine will be posted at twice the speed. After taking a quick poll and sifting through e-mail messages, I decided to bump up all of my completed collections. If I hadn't done this, it originally would have taken until February of next year.

Halberds, another weapon designed exclusively for one class--Captains. These two-handed weapons have a smaller pool of design variety. Most of them are very bland (see this example picture from LOTRO Wiki), looking like a plain stick with a generic axe-like blade placed upon the end. To be honest, I never went out of my way to collect these, with the exception of one or two. The rest happened to fall into my possession via crafting or looting. My original Captain, Morghann, exclusively used halberds. My newest Captain, Gwaimallin, made the transition to greatswords. As such, my collection is limited. However, that won't stop me from sharing those that I have stashed away!

As usual, if you know of another weapon shares the same skin and isn't listed below, let me know! 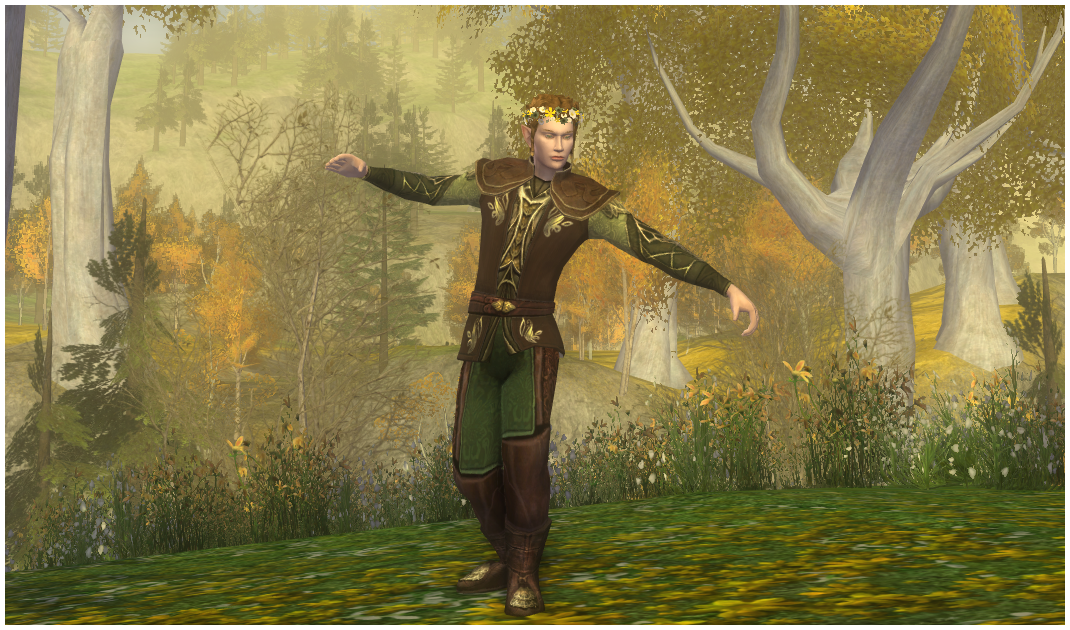 Although the Spring Festival finished about a month ago, I've only just gotten to this outfit. I've had so much content scheduled since the beginning of March that it's overwhelming. Between my latest  project and the backlog of outfits, I've had to reorganize all of my scheduled posts. This is why you've been seeing new outfits approximately every other week and other content squeezed in between those outfits. I promised myself in September of 2015 that I wouldn't be publishing content weekly anymore to avoid burnout. Looks like I've broken that promise! (Broken promises/oaths tend not to end well in Tolkien's world. Oh dear...) However, I will admit that I've bitten off more than I can chew. I'll continue to work with what I've already added and go from there. Once I've finished posting my weapons collections, everything should go back to normal.