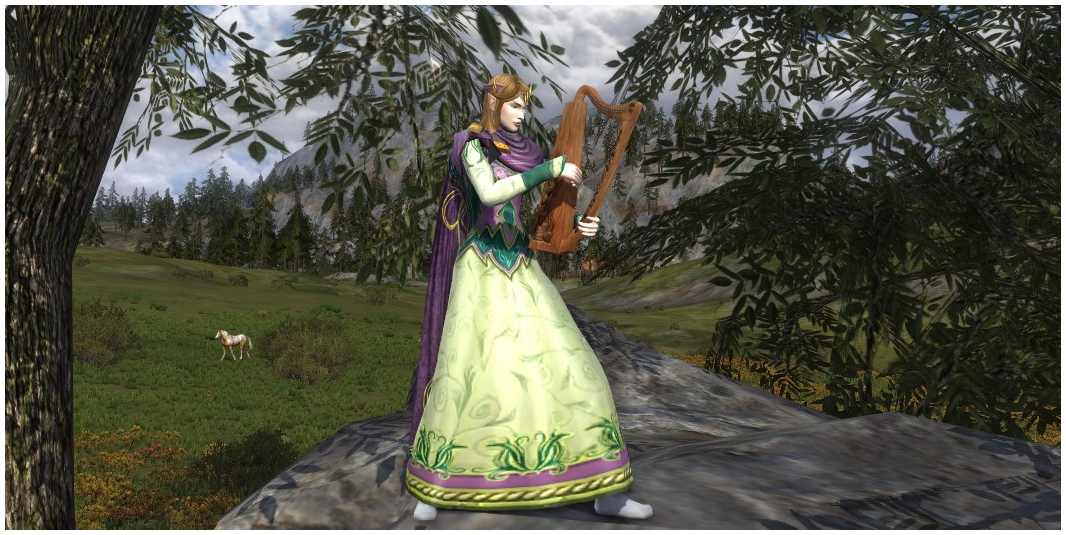 It was by chance that I had found the Lissuin cosmetic pieces on the AH this month. Normally, I would have spent a portion of my time gathering tokens during the Spring Festival this year, but it was nearly impossible at the time. You see, my PC hadn't been repaired yet and my laptop could barely handle LOTRO. I had to cash in half of my Badges of Taste from previous festivals to grab the war-steed pieces, as those are bound on acquire and can't be purchased elsewhere. The rest of the new cosmetics would have to wait, and with some patience, I hoped to find them on the AH...and I did. For thirty gold, I purchased the Lissuin Robe, Lissuin Dress, and the Lissuin Cloak. The hooded version of the cloak still eludes me. 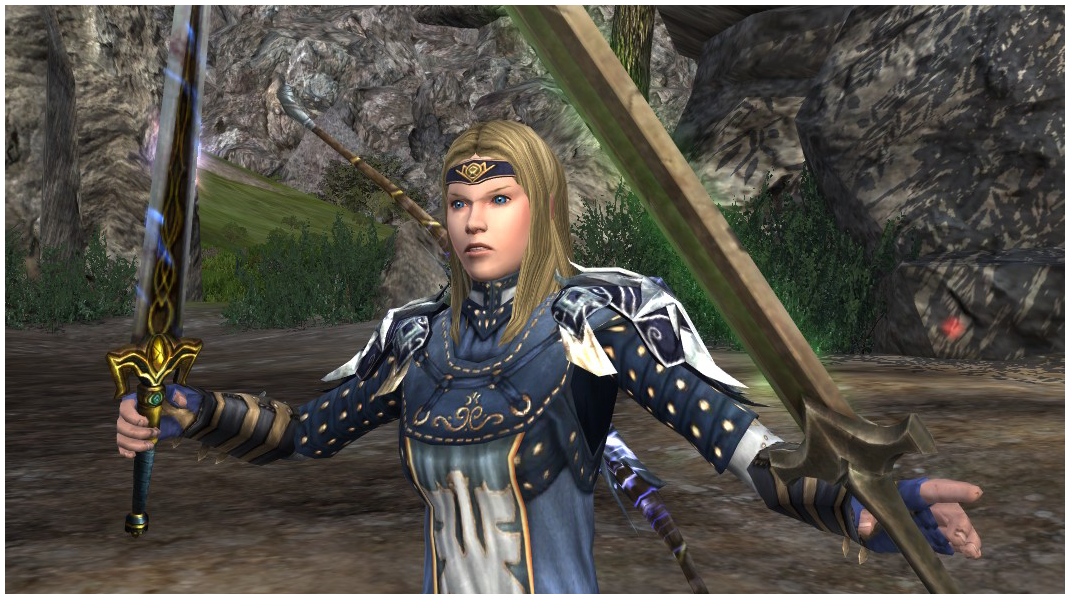 Can you believe that I haven't posted an actual LOTRO outfit since April? It certainly feels nice to get back this! The first thing I did when I got back was figure out what I've used in outfitting (and how frequently) as well as what I haven't used. Needless to say, I've heavily favored a few pieces. One piece, the center of this design, the Hauberk of the Eagle's Crest, hasn't been used until now. You'd think that having a particular piece for more than two years would mean I use it more often. Nope. After fooling around with it, I discovered why it sat in storage. Only the white portions of the piece actually dye, leaving you with a primarily navy color.

My Cosmetic Adventures Away From LOTRO

Greetings everybody! I remebered saying in a previous post, that I've been dabbling in other games like Neverwinter, World of Warcraft, Star Trek Online, Marvel Heroes, and Rift while on a semi-break from LOTRO. I had a bit of an idea. This post is going about cosmetics, but this contains little directly regarding LOTRO. This will probably be the only post of its kind, but it'll give me a chance to talk about the cosmetic and outfitting systems of a handful of other games from a cosmetic blogger's perspective.

You see, I can't resist a good outfit no matter the game I'm playing and I enjoy seeing what I can do elsewhere with my background as a outfitter. I'll be talking a little about RIFT, Neverwinter, and World of Warcraft and reflecting on LOTRO in the process. You learn about dye systems, the pros and cons of taking  screenshots, and the acquisition of cosmetic gear. For clarity's sake, I cranked the graphics as high as my computer would let me.

I hope you'll enjoy this minor excursion while I work on future LOTRO ensembles!

One of my greatest pleasures since June has been exploring the landscape in RIFT. I have been absolutely impressed by the design of the world and the cosmetic versatility of many pieces of gear. The designers have certainly performed above and beyond my expectations with the details of every piece on an engine intended for gameplay over graphics. Clipping is virtually nonexistent. Each and every piece fits your race and gender perfectly, as if they were specifically tailored to that model. (If only LOTRO could get that right!) The RIFT Store offers prepackaged outfits, usually in the form of cosmetic end-game armor bundles, both PvE and PvP, and expansion specific sets! Both sexes can strip down to undies and wear festival-earned bathing suits if so desired. Have I mentioned that there is no level requirement to cosmetically slot a piece of gear?

The wardrobe system is very simple and is comparable to LOTRO. Just access your wardrobe and drop the piece into its respective space. Feel free to toggle on and off each piece as you see fit. RIFT features twenty possible wardrobe combinations per character, unlike LOTRO's seven. You can purchase each set with either game money or Store currency and the cost incrementally increases with each purchased.

Oddly enough, this is one of those games where your gender affects how your outfit appears. Unfortunately, I'm very on the fence about this. Unlike LOTRO, the appearance of your characters--females especially--lean towards the more mature, fan-servicey side of the spectrum. Most chest pieces will give you a wonderful helping of cleavage from a variety of perspectives and most leggings will give you an eyeful of her thighs. Even full-plate emphasizes your female character's chest no matter the race, constantly shoving her gender in your face. On occasion, you'll be dealing with the aggravating cleavage wedge. Male characters, however don't have to deal with this issue. This is my only gripe about the cosmetic system for RIFT. You will not find hypersexualized characters in LOTRO, for which I am eternally grateful.

The pre-order expansion information for Helm's Deep has been released. Naturally, since this is a cosmetic blog, I'll be bringing the skinny on the cosmetic portions of these packages. It's expected to go live on November 18, 2013 and provide the following bonuses:

It's certainly been a while since I was last here! Now that my computer is back in working order, I can resume working on my blog from time to time. However, I'm still somewhat on break from LOTRO and biding my time until Helm's Deep. I've been fooling around on Rift, Neverwinter, and World of Warcraft (someone got me a 30 day game card last year and I never used it until now) in the meantime. I do have to say that of all the games that I've ever played, LOTRO by far has the superior cosmetic system between the versatility of designs and the assortment of color from which to choose! I took a couple of screenies from my brief adventures today...hope you enjoy them!