Multiple players have been asking on the forums and in world/glff chat where else they can obtain the Dol Amroth class armor skins that came with the release of U14. As a result, I picked up this project in the hopes of creating some sort of guide. Here, I'll list as best as possible the alternative methods to collecting these armor skins. Because this post is strictly for skins, I won't be including dye colors. I'll admit there are some pieces that I don't know. I never bothered to get one of each class to level 95 or subbed long enough to have the entire cosmetic library at my fingertips. However, I'll do my best. Just to warn you, you will see *multiple* pieces listed that share the same skins.

If you see a piece that's incorrect or an alternative item with the same skin, please leave a comment below.

And by the way, only half of these sets are cosmetically original. I know my blogs and outfits well enough to know some of these have been lifted from other sites and slightly altered, whether it's by dye color or a single piece. If that is the case, I will provide links to the original creators and the specific outfits beneath each set to give credit where it is due.

Hunter ("Of the Liberator" set) OUTFIT ADAPTED from The Starry Mantle by the designers. 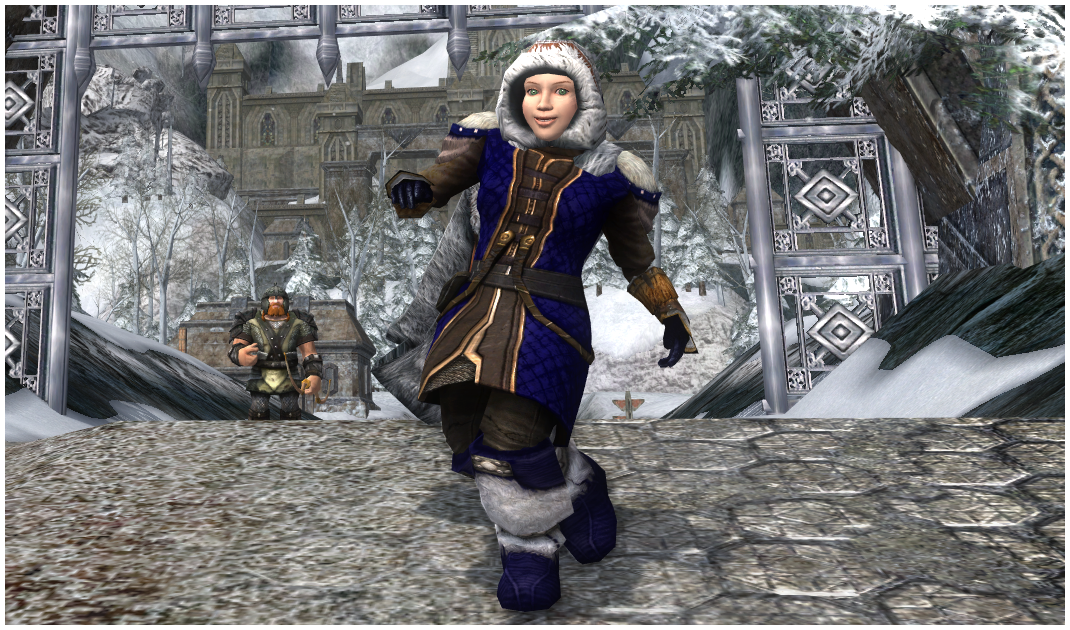 It's been a while since I've dressed up a hobbit, especially this little darling. I don't know what it is about them, but no matter what I put on a female hobbit, I feel all warm and giggly and melty on the inside. It's like a cuteness overload! (D'awww!!!) And speaking of warm and fuzzy, I felt compelled to create a winter-friendly outfit for one. Versus using evendim blue, which I abuse to no end, I opted for the darker ered luin blue to make a bolder contrast between the lighter and darker colors, and to make the fur stand out. Have a character heading towards the Misty Mountains or Forochel? Look no further!

Despite the fact that summer is in full swing, sweltering heat and disgusting muggy days included, a little bit of winter apparel makes the weather seem cooler. Any more 90°F days (32°C), and I'll be praying for the snow! Gloredh of Wandering Around Arda used the same location and temperature-related reasons in a recent outfit, Ambassador to the Elves.

The Summer Festival has gone live one day early, much to my surprise! This means this festival will run from July 21 to August 8, 2014. Unfortunately, we're all getting the usual cosmetics. Old-style robes and blanket steeds with new skins. I think you all know by now how disappointed this makes me. However, I'll still collect the robe and cloaks.

If you are new to LOTRO or to this blog, you can find pics of the 2012 Summer Festival rewards here. I was away last year and unable to take pictures of 2013's new rewards. If you're interested in seeing those, visit Cosmetic LOTRO.

To the right of each cosmetic is a dyed version. I chose crimson this time to make patterns more distinguishable. 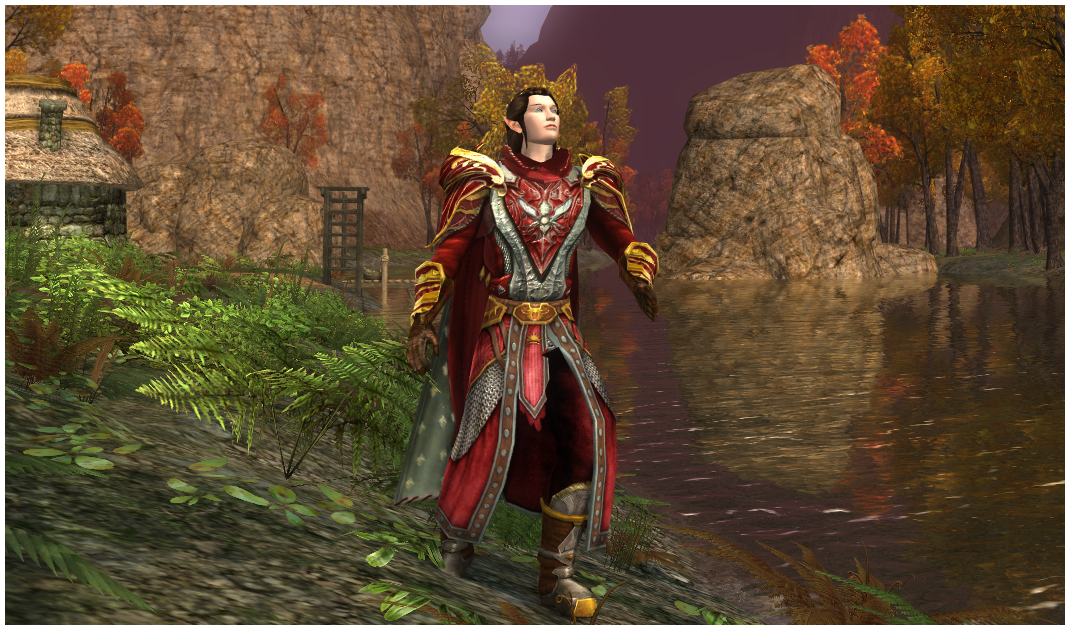 For once I left the safety of the starter zones on this mule character. It wasn't easy making it to the southern regions of the Trollshaws, as everything had purple names. Despite that, this was the place most connected to the outfit...and it was worth dying a few times on the way for several screenshots. Anyway, I had been toying with the idea of another elven sentinel's garb. Unlike my first one, which was fully dyed indigo, I thought something reddish would do nicely. It's great for characters of an elven heritage or any allied character while progressing storywise from Rivendell to Mirkwood. With the exception of the Mines of Moria, it'll help your character blend in wonderfully with the high volume of elves you'll encounter on the way.

Much to my surprise this morning, I discovered accidentally that the Erebor armor sets are one hundred percent dyeable with the release of Update 14. I was in the middle of making outfits, testing out orange on some chest pieces, when I mistakenly clicked on an Erebor chest piece. A million red flags rose in my head and I dropped what I was doing to fly to the nearest skirmish camp. Every piece on every set dyes the selected color. I'm praying that this is no mistake and that these sets will permanently stay like this. However, the "In Defense of Erebor" deeds still gate them. (Honestly, I would have preferred ceremonial sets to avoid this requirement. I've only done the deed on one character.)

For those of you unable to log into LOTRO today, I'll provide some fabulous screenshots. Keep in mind that I'm dyeing these sets in the most contrasting way possible to show which areas will change color in relation to the original. To the left is the original color of any given set and to the right is the newly dyed version. The matching class will be listed beneath the appropriate picture. 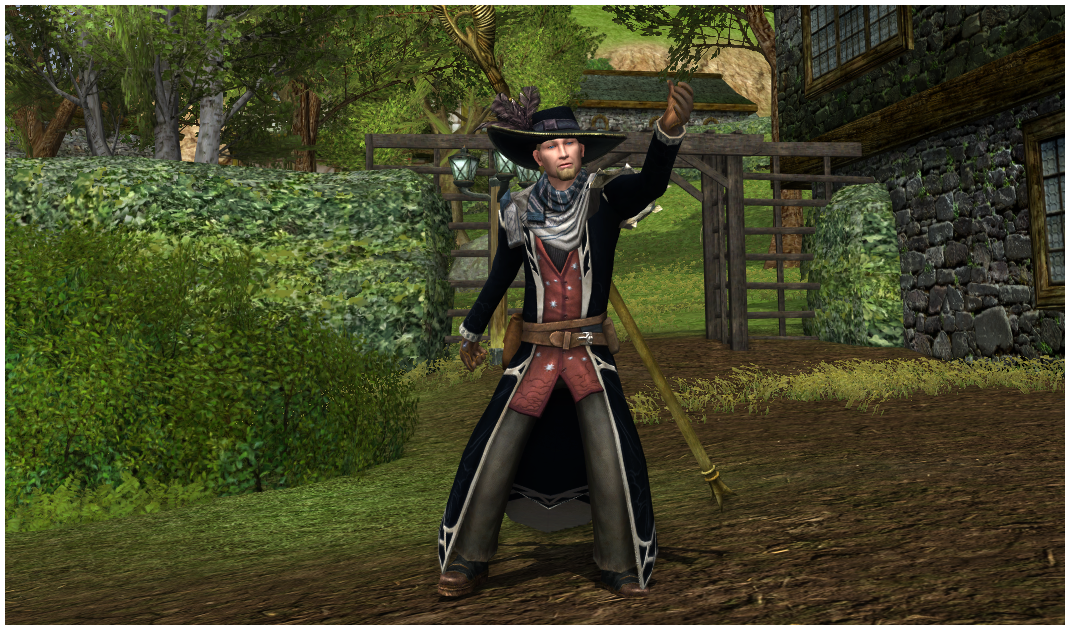 At first glance, you may think this outfit is black. In fact, the main dye use here is steel blue. Because this robe has a darker base, steel blue actually transforms into an alluring midnight blue. (Finding a background that didn't make it appear a true black wasn't easy.) Once U13 went live, I started experimenting with the new dye color despite not having it yet. I figured that I'd make a couple of outfits ahead of time, that way I could start displaying them once I had the recipe. This is one of those preemptive creations. I have a couple more on the way, each working with lighter shades of steel blue.

It's been about a month since my first "Simple Fashion" installment. This week, I'm bringing you some ideas for various dresses obtained in the game. Last time I checked, there around 40 dresses in LOTRO, most of which are long-sleeved, short-sleeved, or sleeveless versions of the same dress. If you discount the alternate variations, you're looking at, maybe, sixteen distinct dress skins between in-game rewards and the LOTRO Store. Honestly, it would be nice to have more in the game, even if it means you see them casually worn or used in RP settings.

Just like last time, no big stories or multiple screenies of one outfit...only three outfit ideas focusing on dresses. And for clarity's sake, I turned off the bloom effect in each of the pictures. 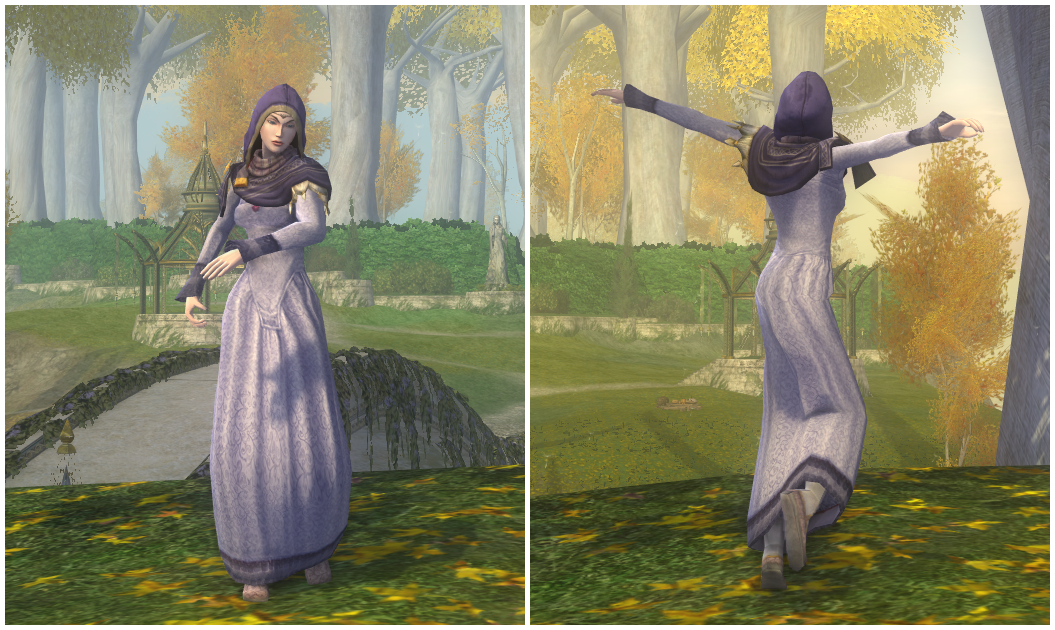