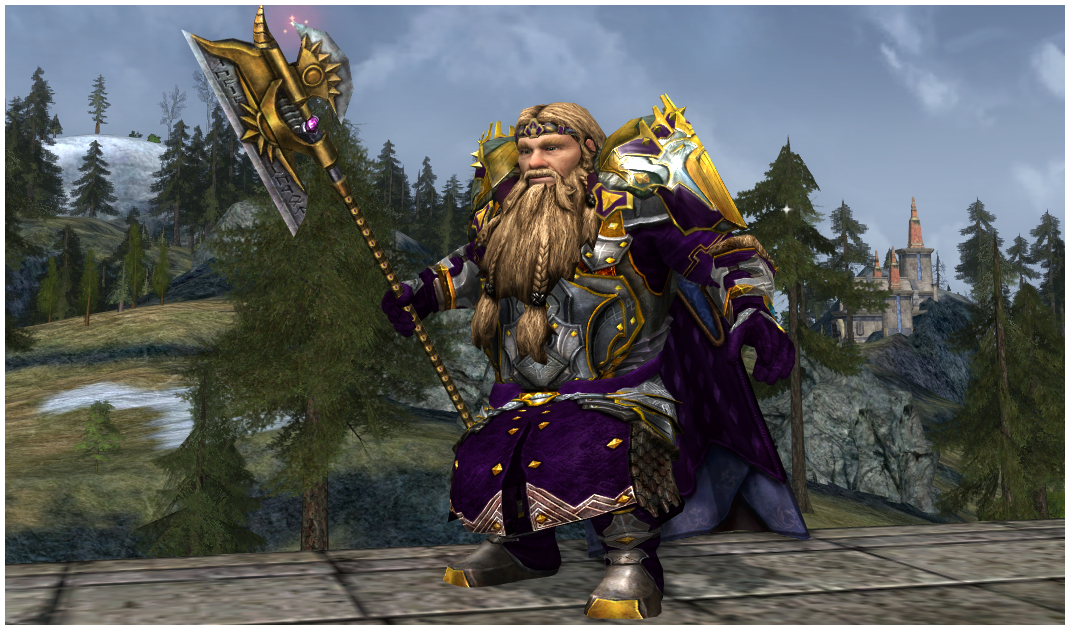 About a week ago, when my work, home, social, and gaming life finally achieved some balance (can't forget the end of the Harvest Festival too, which I'd been grinding like crazy), I took the plunge and purchased the U23 content, Where Dragons Dwell. I've actually enjoyed most of it. And I'm excited that the dwarves have gotten some much needed love for the first time since Mines of Moria. Yes, they've popped up from time to time--the Mirkwood Epics, Thror's Coomb in Enedwaith, and Erebor, most notably--but have had no fully fleshed, substantial, and dedicated content until LOTRO's last update.

And the best thing about it, outside of the new storylines? The impressive and beautiful new dwarven cosmetics, all obtained from questing, the Figments of Splendor vendors, and the instances. Gloredh from Wandering Around Arda graciously uploaded two entries, both of which can be found here and here. 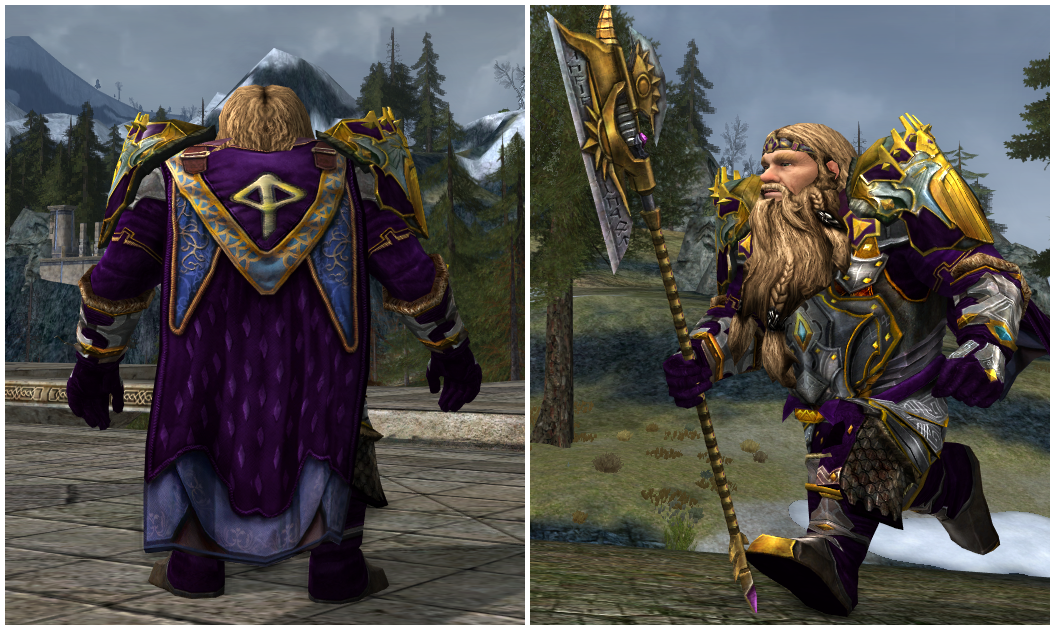 This outfit primarily used the Captain's set from Moria. Ironically, this can only be obtained by a High Elf or Race of Man Captain due to racial restrictions. And to further the irony, of all the Moria class sets, the Hall-general one was the most Dwarvish in appearance. The shoulders, in my opinion, were a dead giveaway. Sticking with the Moria sets allowed me to ease my way into outfitting dwarves. It was a shame to see dwarven-style cosmetics vanish until the Grey Mountains.

I'd also forgotten that there was an emphasis on the chest and a de-emphasis on the legs. Having almost exclusively worked with elves and men, it was an awkward transition. Once I've adjusted to their body structure, I'll drop the safety net and start mixing up armor pieces between the class and crafted sets. The U23 cosmetics would be fair game too, now that I've collected a bunch! 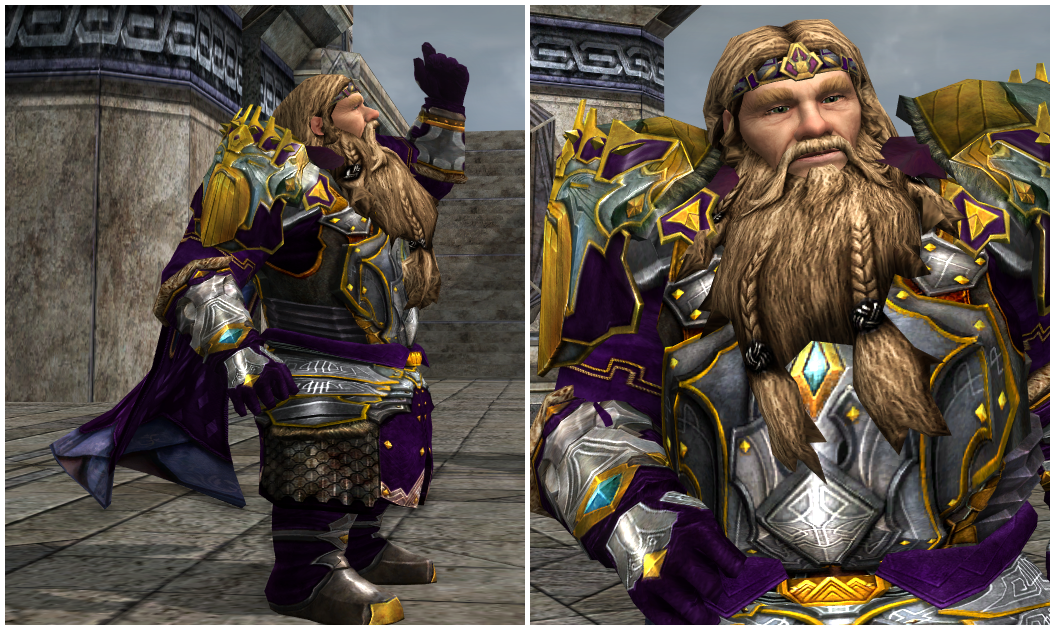 Anyway, dwarves were shorter than I anticipated...at least in my screenshots. When I've uploaded photos to Material Middle-earth, I've always included a scenic header, a scenic footer, a full frontal, a full rear, a full side view, and a frontal close up. I didn't anticipate that every photo would essentially be a close up, making it difficult to differentiate between the others! And even with the close up, I can only fit so much dwarf into it. I've considered it a lesson learned and will most likely alter my screenshot format for future dwarf posts. This was actually my very first time featuring this race in the six and a half years Material Middle-earth has been active. And it's been an informative first time too, both in outfitting and formatting! 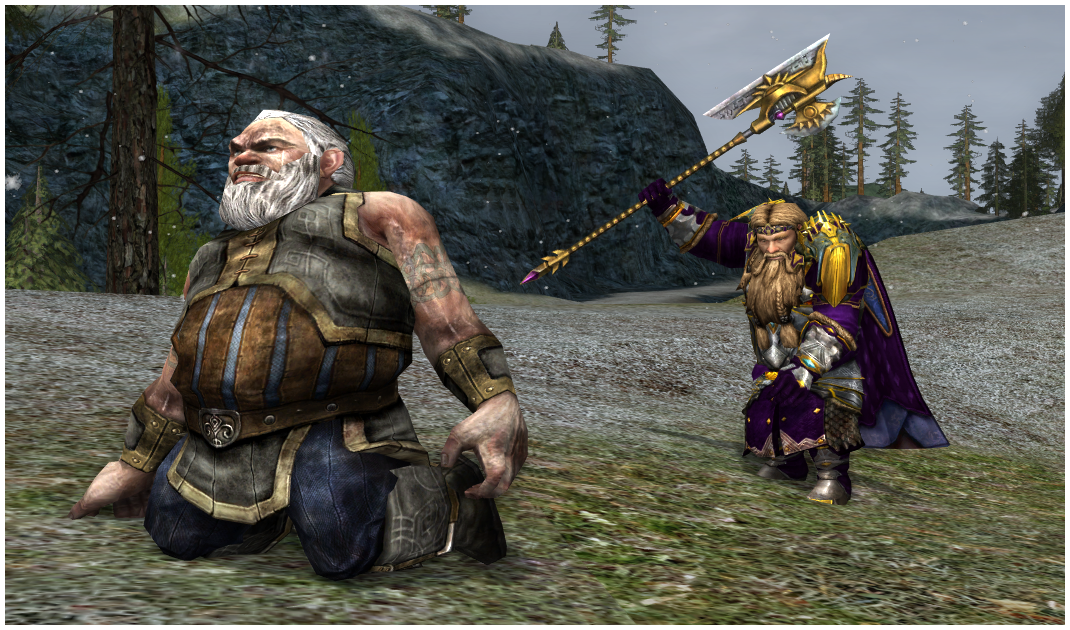 **The skin can be also bartered from the skirm camp cosmetics vendor under "Annúminas Cosmetic Clothing - Light" as the Ceremonial Circlet of the Seven Stars.
***Not many of these cloaks are found in LOTRO nowadays. As these were from the Riders of Rohan days, the only hope of finding these are on the Auction House. Few players are willing to part with them. The only other way of obtaining this skin was by winning the Cloak of Hwin from the Ost Dunhoth raid before it was made scalable with U10, which brought a revamp of the loot pools.
Posted by Nath at 10:00 AM