Greetings, readers of Material Middle-earth! I wanted to try something different today. Rather than talk about the outfit itself, I've decided to share a story inspired by both my appearance and the location. One Mirkwood quest in particular, A Dangerous Lair, was a major influence in this literary experiment. And I also pulled some tidbits from others for atmosphere. It may not exactly be LOTR-appropriate, but it feels right for LOTRO.

I'm about ten years out of practice with story writing and I know it's not perfect, but I hope it's enjoyable! 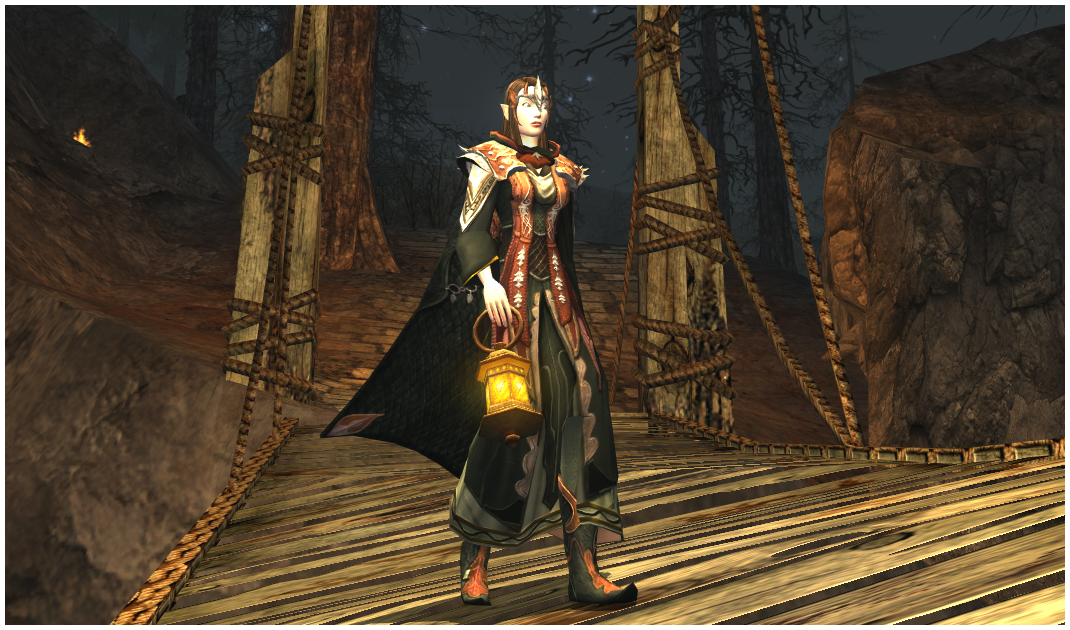 Lanael looked above her, rubbing her eyes, and fixed her gaze upon the ceiling. She heard the skittering and scratching as something moved across the roof. There were moments when she was unable to pinpoint the exact source, the sounds nearly drowning out the crackling coming from the hearth. At least one foul creature had climbed upon the Haunted Inn's roof and for what purpose, she had no idea.
"The woods are rife with poisonous spiders," spoke the tall, grey-clad Malledhrim Sentry pacing around the Haunted Inn's common room. "At night, they are especially active, lurking in the darkness of the trees. Sometimes, they crawl along the rooftop, hoping to catch the guards unaware. They are a threat, truly, to our efforts here."
"So that's what that is. Have you located their nest?" she asked boldly, before yawning. The wooden chair she'd tried sleeping in hadn't been very comfortable. It was unbalanced and wobbled every time she'd shift positions.
"The Dreadweaver's Lair is to the southwest, a short distance past the road leading to Ost Galadh."
"Why haven't you destroyed the nest?" Lanael crankily pressed, irritated by the lack of sleep. "Surely, the small host you've gathered here can remove that threat."
The sentry stopped pacing, growing quiet. He looked around, noticing a party of adventurers conversing over a small meal in the adjacent room. He slowly approached the inquisitive elf, the tension rising in his lowered voice, his fist clenched. "We are not as well off as it seems. Our numbers have grown smaller. Elves and orcs alike have been taken by the spiders plaguing us from the south. Scouts that have been sent north to Dannenglor haven't returned. Shades and other foul beings attack from Audaghaim, across the eastern bridge. There is no one to spare to destroy the nest."
Lanael paused, finding it difficult to speak. The sting of his words had caught her off guard. "I'm sorry. I didn't realize..." she whispered as she looked down, unable to look in his eyes.
He guided her to a wooden bench across from the roaring hearth and sat down beside her. "My apologizes. It wasn't my intent to speak so harshly. You didn't know. You were never meant to come here. One of our scouts saw you bound for Ost Galadh as the sun was setting and guided you here for your own safety. The woods are especially dangerous after dusk, as you have just learned."
As they sat there silently and stared at the slowly diminishing flames, the scratching sounds overhead faded. The crackling of the fire and soft, indistinguishable voices from the adjoining room filled the inn once more. Slowly realizing the relative silence, they sighed collectively.
"If you'll excuse me, I must check on my injured companions in the cellar. Another was poisoned by a spider the night before last," said the sentry as he rose from the bench. He began to walk away, stopped mid stride, and he turned around briefly. "And, if I may be so bold, I'd suggest getting some rest, now that the inn is quiet once more. You'll need to be alert when you travel in the morning. Sleep well." 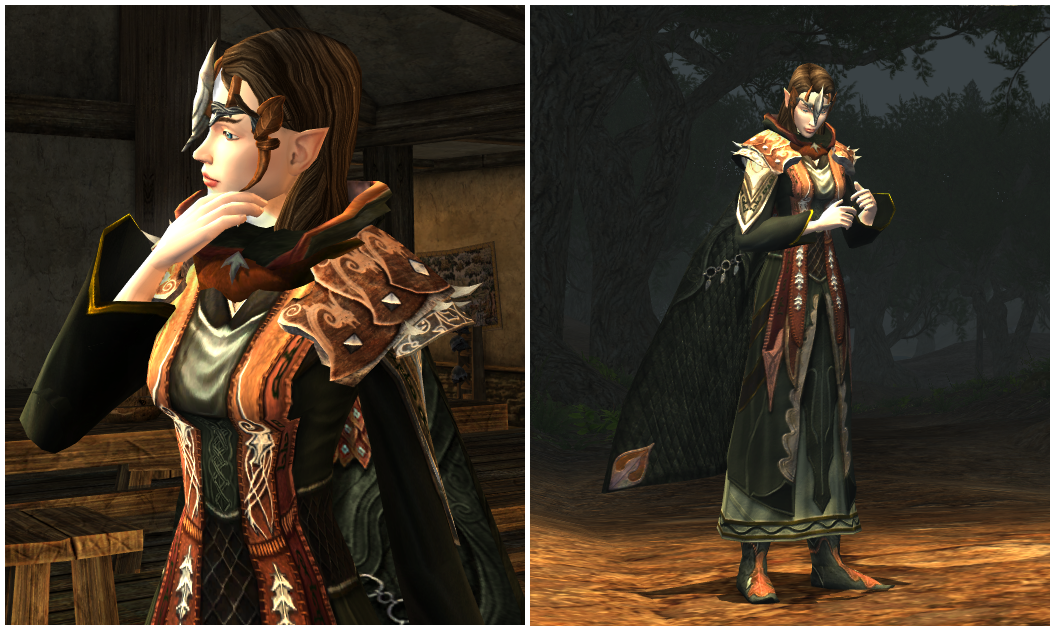 After nodding a silent thank you, accompanied by a kind smile, Lanael returned her gaze to the hearth and stared deeply into the flames. She rested her chin on her folded hands, elbows pressing into her lap. Sleep would be impossible now that she was wide awake. Her thoughts lingered upon the soldier's words, his tale of various woes that had befallen those stationed here. She wondered how long the Malledhrim had been here. She wondered what else was roaming the malicious mists of these forsaken woods. She felt the anger and sorrow build, mixing into an unsettling blend of frustration. Something had to be done...but what? Sitting there was doing absolutely nothing!
Lanael, irritated, quickly rose from her seat. As she stood, her rune-satchel was torn from her hip, caught by a large splinter. A small round stone fell from it and rolled beneath the bench into a pile of dust and mess of cobwebs. She knelt down, carefully freed her satchel and reattached it. Reaching beneath the bench, she retrieved the orb from the floor. Wiping away the sticky filth, she cradled the stone in her hand and traced the inscribed Cirth runes with a free finger. They were runes for fire and cleansing. Fire and cleansing. Glancing at the cobwebs still stuck to her hand, whatever anger remained transformed into a sense of purpose and determination.
Swiftly Lanael made her way towards the inn's entrance. As she approached the exit, she noticed a cluster of barrels, most of them broken, pushed against the stone wall. Atop one was a sole lantern, covered in a thin layer of dust. She brushed it off with her free hand, just enough to see through the glass, and opened the slightly rusted door. Still clutching the rune-stone in her other hand, she closed her eyes and concentrated. The stone began to glow a bright red-orange. Lanael lifted her empty hand, waved it in small, controlled motions, and whispered words of power. The half-melted candle within brightly flared to life.
"Those spiders will not survive the night," she spoke quietly. Too quietly. "And if they do, their lair will be reduced to ash, and their numbers scattered." She secured the tiny glass door, put her rune-stone away, took the lantern in hand, and exited the inn. 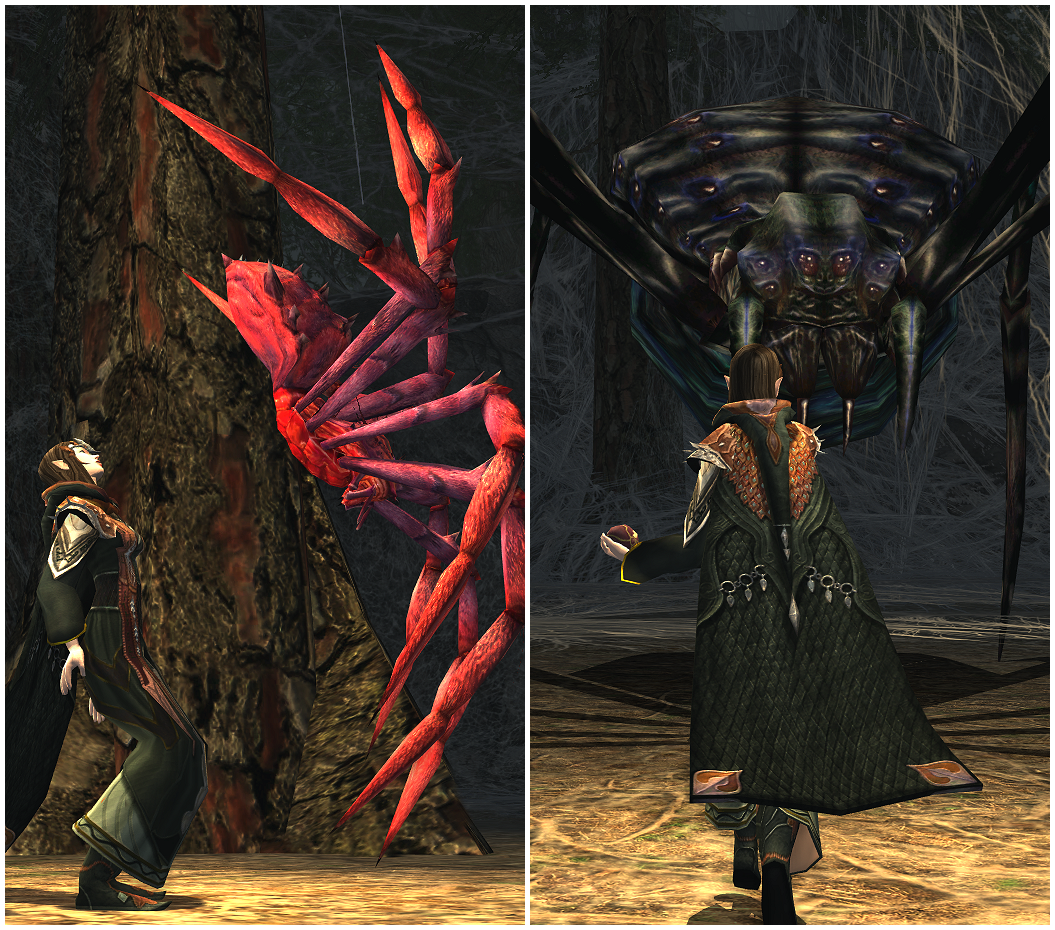 Almost immediately, the cold and damp night air made her shiver. The moon, partially obscured by thin passing clouds, hung high above her, it's pale light barely illuminated her surroundings. An eerie mist blanketed the road, following the road south as it descended into the darkness and vanished. The mirkeaves were silent, save for the two murmuring guards near the eastern bridge that led to Audaghaim. Too busy observing the shades aimlessly wandering the crumbling village, they were oblivious to her presence.
Inhaling deeply, Lanael walked southward and traveled down the cobbled stone road that weaved between the rotted wooden shells of abandoned home. Periodically, she'd look up into the canopy of  gnarled trees, raising her lantern towards them, watching for any suspicious movement. Aas the forest grew thicker, the road turned from stone to dirt. Tattered strands of sticky webbing hung from branches, moving slightly in the weak breeze. The darkness grew, and with it, so did the sounds of chittering and scratching.
"There you are," she said whispered as her keen elf eyes caught shadows moving high above her. She followed them, away from the path, tiptoeing through dead, dried leaves and avoided stepping on brittle twigs likely to give her position away. It wasn't long before she stood on the edge of a precipice, looking into a heavily webbed hollow. The cocooned husks of orcs hung from barren trees.
As she pondered her next course of action, the ground beneath her shifted. Stones popped out from the rock face beneath her and the soil cracked. Lanael wasn't able to move soon enough and she found herself being swept below in an earthen cascade, sliding and tumbling into the pit below. It took her a few moments to regain her senses, her body sore from the fall. And as she rose, she noticed that her lantern had shattered. The candle that kept the darkness at bay laid there, covered in dirt and webbing, surrounded by glass shards.
Without warning, a gigantic, barbed spider rapidly descended on a singular strand, hissing and thrashing its venomous fangs as it landed. Lanael took a step back, hastily reaching into her satchel and drawing her rune-stone. As the spider took its first menacing steps towards her, she tightly clutched her glowing stone. She raised her empty hand, palm stretched outward, and released a fireball. Nimbly, the spider evaded it and the leafy ground erupted in flames. It kept its distance from the raging fire rapidly spreading across the dry forest floor. As the light grew brighter, she caught more movement in her peripheral vision. More spiders emerged, gnashing their jaws, adding to the cacophony of terrible sounds. The one spider already before her charged forward, attempting to snare her while their ranks grew. Once again, she flung forth a fireball, brighter than the one before and directly struck her assailant mid-charge. It cried out in anguish, writhing on the ground, immolated, before curling into a lifeless, upturned mass.
Nothing else dared attack her. However, they formed a ring at the edges of the hollow, hissing, leaving an opening directly across from Lanael. It wasn't a means of escape. Something was coming. At first, she couldn't make it out, but she could hear the shifting of leaves. Six eyes glowed in the distance, getting brighter as it got closer to the flames. One gangly leg appeared. A second. Four fangs next. Then came the black bulbous body of a spider with proportions beyond expectation that made the rest of them seem inconsequential. It was her. The queen of the Dreadweaver's Lair. It lurched forward, taunting her as it drummed the ground with its forelegs.
Drawing upon her reservoir of strength once more, Lanael began to focus. Her rune-stone rose in the air before her. Runes formed at her fingertips as she moved them through the night air, weaving the flames that would raze the nest before dawn's first light. 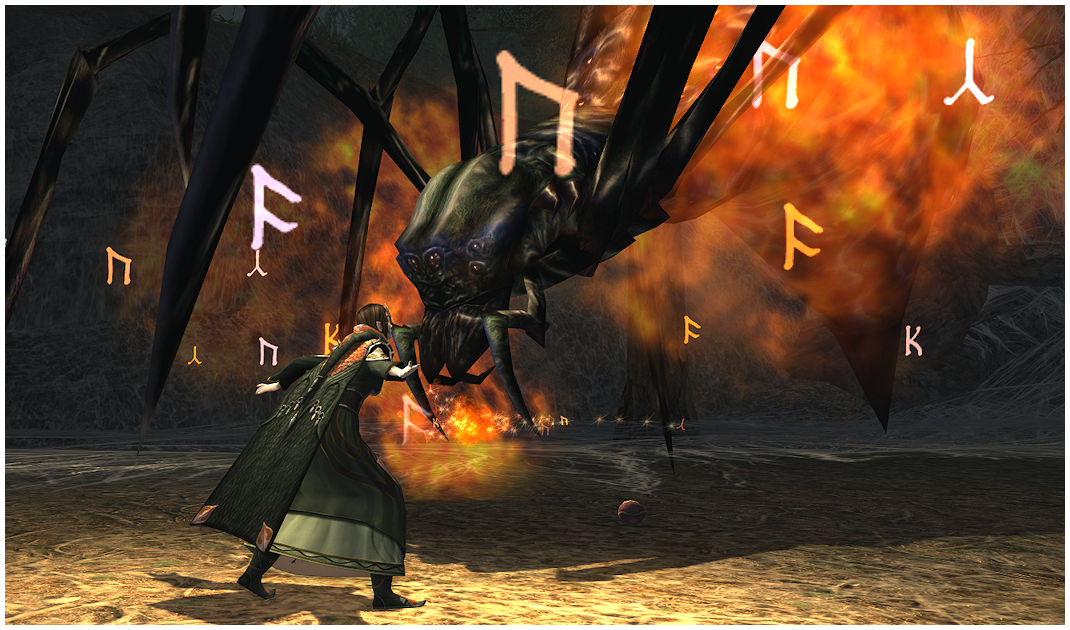 **If using ashenslades green isn't an option, olive, though noticeably lighter, works just as well.
Posted by Nath at 10:00 AM