Memories of the Last Alliance 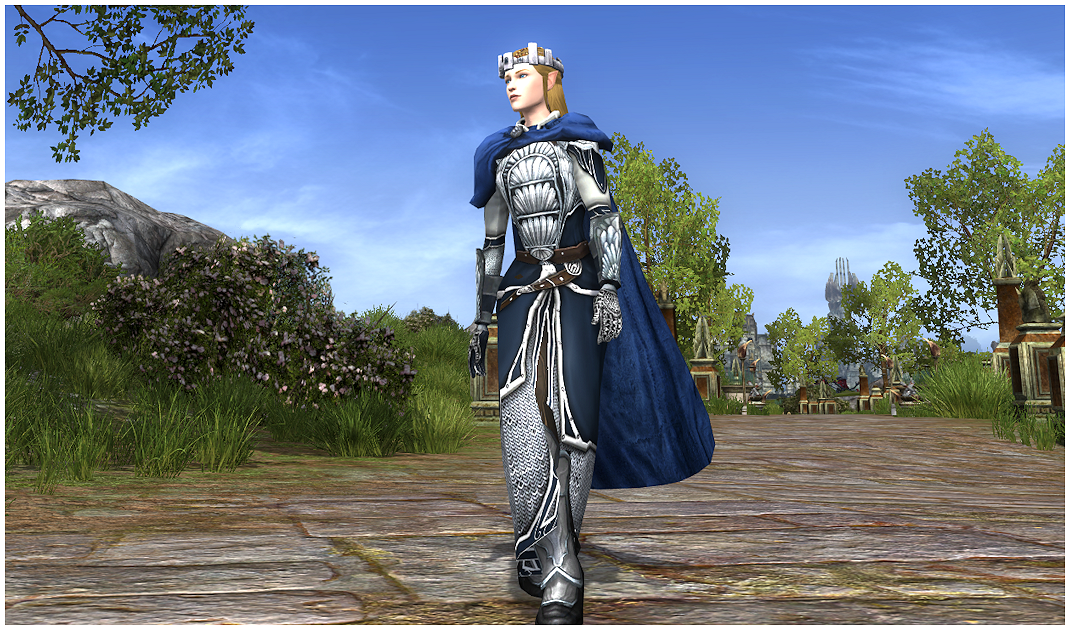 It was exciting to come home on Wednesday evening and discover that The Minas Morgul expansion was available for pre-order. I wasn't expecting it so soon since the Vales of Anduin region hasn't been out very long! I did pre-order the expansion almost immediately that night, wanting to get my hands on all those new cosmetics, steeds, and the Stout-axe race. I'd known we'd be exploring the Morgul Vale, specifically, Minas Morgul itself, and I was hoping we'd be returning to explore other areas of Mordor, like Nurn (that gate in southeastern Talath Úrui was such a teaser!) It turns out that wasn't the case. After watching Friday's Q&A stream, I learned about "Mordor Beseiged," the other area mentioned on the expansion page.

As it was explained, we'll be playing a character living through the final year of the Second Age, specifically during the Siege of  Barad-dûr. If I understood MadeOfLions correctly, Mordor Besieged acts as a sort of session play styled zone, allowing us to retain our character's skill sets and appearances while experiencing someone else's narrative. Certainly an interesting way to tell the new story! Though specific details weren't revealed, I hope the Siege of Barad-dûr's addresses the end of the Last Alliance of Elves and Men, the deaths of Anárion, Elendil, and Gil-galad, the temporary defeat of Sauron, Isildur's acquisition of the One Ring, and the numerous sorties between Sauron and the Alliance. 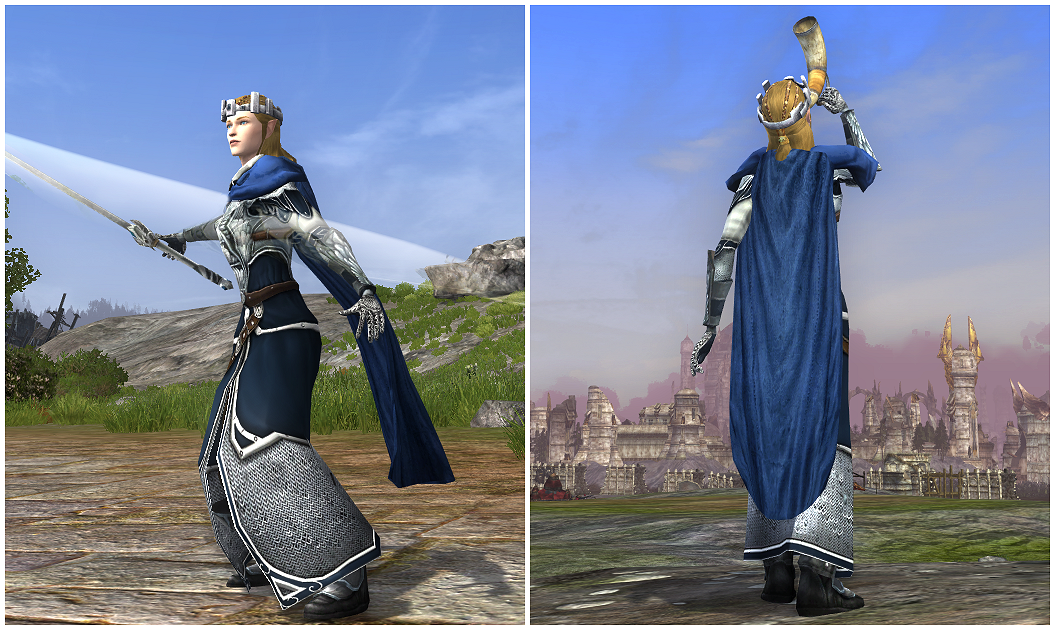 Just thinking about all of that, especially the Last Alliance of Elves and Men, inspired me to make this outfit. The Great Alliance cosmetic set that came with the higher tiered expansion packages was beautifully designed, appearing as if it were a fusion between Dol Amroth, Osgiliath, and Gondorian styles. I wanted to take a creative approach to using these pieces, which dyed beautifully and boldly, and avoid using the entire set. I hoped to recreate an appearance appropriate to the Second Age. And I was even able to repurpose a dwarven crown too! 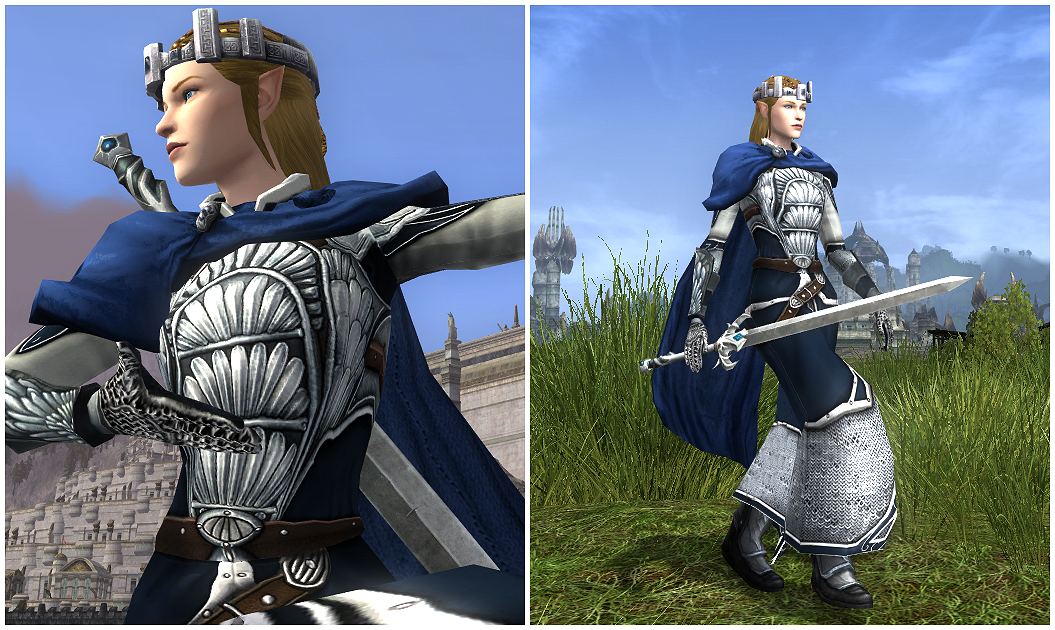 As gorgeous as the Great Alliance gear is, I ran into an issue with the leggings. The problem? Severe clipping. After I've finished an outfit, I run my model around outdoors, seeing how the clothing looks in sunlight. It took a couple of minutes, but I noticed the boots clipping through the leggings as my cloak moved about. I changed my camera angle, moved forward again, and saw it wasn't just the boot...it was most of the leg. I was very careful choosing my screenshot angles, which is why this doesn't show in the images above. Please see the image included below.

Should anybody recreate this outfit or use those leggings, be warned. I rotated through all of my alts to learn that this clipping occurred on every race/gender combination, except for human males and Beorning males. Even on those two, there's some clipping, but nowhere near as pronounced. 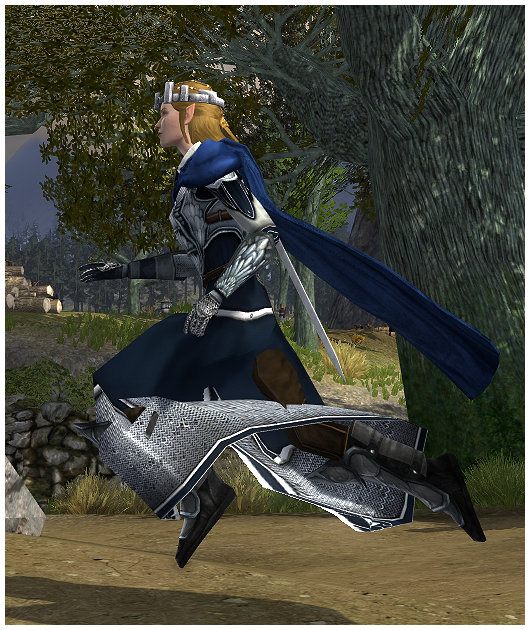 **These skins also drop randomly from landscape creatures level 50 and above
Posted by Nath at 10:00 AM